Two Kiwis and an Island: The Return of "Conchords" and "Lost" 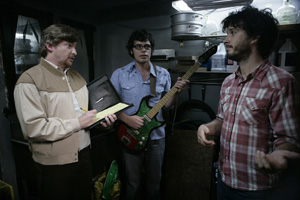 God bless January. This month ushers in the season premieres of my favorite comedy series, “Flight of the Conchords,” and the ultimate drama/sci-fi/category-unto-its-own show, “Lost.”

It’s been over a year since the first season finale of “Flight of the Conchords,” so I’ve had to placate my addiction to the New Zealand duo with repeated spins of their Grammy-winning The Distant Future album and their self-titled effort which debuted at No. 3 on the Billboard chart. Videos on ronaldchevalier.com of Jemaine Clement as a character from the upcoming Jared Hess film Gentlemen Broncos have helped ease my pain, too.

All the waiting was rewarded by Sunday’s premiere that, in case you missed it, began with Jemaine and Bret’s normal band meeting with Murray (Rhys Darby), but with one major difference. Murray is now a big shot due to the huge success of the Crazy Dogggz, so the guys fire him as their manager.

They proceed to get into a huge mess – per usual – involving their work visas, Femident toothpaste for women, eventually re-hiring Murray and “angels in the clouds … doin’ it.” Along with appearances by season one regulars Mel (Kristen Schaal) and Dave (Arj Barker), the episode delivered laughs aplenty and indicated that the kiwis’ sophomore season promises even more.

Speaking of promises … since its Sept. 22, 2004 premiere, the writers of “Lost” have continually pledged each successive season would answer all of the questions leftover from the last. But every time one mystery is solved, multiple new questions arise.

This is precisely what has me (and millions of other viewers) hooked, though. If I wanted to be spoon-fed mindless crap, I’d tune into the new Tyra Banks/Ashton Kutcher-produced, reality competition program, “True Beauty.”

“Lost” lures watchers in with fantastic writing, superb acting and plot twists that repeatedly leave you on the edge of your seat. It has spawned numerous fansites that attempt to piece together the mythology created around its massive ensemble of characters and even a tribute band who summarize each of the show’s episodes into a song (myspace.com/previouslyonlostmusic).

Co-creator J.J. Abrams (who also co-created two of the best contemporary series to feature female leads: “Felicity” and “Alias”) has exploded to A-list status since because of the success of “Lost.” He directed the new Star Trek film, coming to theaters this May.

Season five kicks off tonight and will reportedly follow the survivors who returned to civilization – the Oceanic Six – and will eventually reveal why they need to go back to the island and what happened to the ones they left behind.