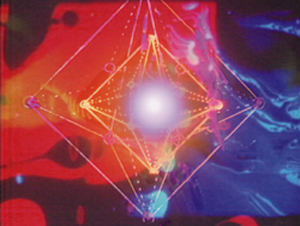 Nothing cools down a California winter day better than a mid-week screening of experimental music light show psychedelia on a college campus. And to prove it, the UCLA Film and Television Archive and the Center for Visual Music have teamed up to un-vault some of their rare colorful shorts for the acid trip in all of us.

The 77-minute program called “Essential Visual Music: Rare Classics” will be like an evening at the Pink Floyd show at the Laserium except Roger Waters is filmmaker Oskar Fischinger – who in the 1930s used multiple projectors and an early color film process called GasparColor to produce fluid, modulated light shows – and instead of cartoons acting out lyrics to “The Wall,” amorphous clouds of gas will distort themselves to represent the scientific structure of the accompanying audio.

Some of the pieces – made during the “turn on, tune in, drop out” generation of the ’60s and ’70s – are early experiments in computer graphics from UCLA and CalArts.

There are 12 classics in all, spanning over 60 years of visual music and turning clashing sound waves into shapeshifting rainbows. The result is a fusing of art and science to create a unique sensory overload.

The screening is free and a discussion with three of the directors will follow. 7:30 p.m.