Rio En Medio: In Between Frontiers 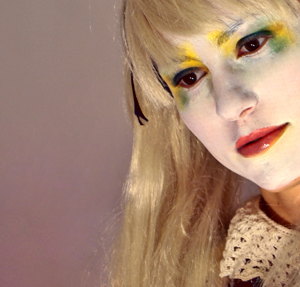 Rio en Medio is a small town in New Mexico – its name means “river in between” in Spanish. It’s also the moniker singer and composer Danielle Stech-Homsy calls herself when she’s not translating Russian poetry but writing her own.

Frontier, her second album, explores Stech-Homsy’s gift of translation but in the language of instruments and samples, and her voice.

“I feel like nature is the most complex art experience that a person can have,” she says in her sage-like manner. “There is no replicating the experience of hearing water rushing down a river or a bird singing in the trees … and the best thing I can do is be a translator of that experience.”

The material for Frontier, though, does not draw literally from nature. Instead, Stech-Homsy explores the far reaches of the physical realm – such as space travel or New Mexico’s landscape through the lens of her childhood memories – as well as the edges of human understanding, particularly what we comprehend about our relationships and ourselves.

“I feel like the more we open ourselves to unexplainable experiences, the richer life is,” she reflects. “That is the poetry that needs to be brought into our conscious living.”

Though she is a poet by heart and profession, Stech-Homsy wanted to move away from writing in metaphors for this album and chose to write in the way that she speaks. Even the instrumentation follows these speech patterns, making some of her songs come across as half-spoken.

“I just wanted to get close to a natural blurting out of what was going on,” she says. “This album was drawing out material from my heart.”

Consequently, there is no clear narrative or story behind the album or the songs. Though this album has a quietly emotional arc, she leaves the interpretation up to the listener.

Stech-Homsy’s musical aesthetic is derived from the culture of coincidence she observes and creates. Abstract experiences like the intangibility of dreams and the daily mysteries of life occur alongside and within the noise of people talking, wind blowing or harmoniums humming. Using mostly her laptop, voice and ukulele, most of the songs on Frontier sound like pretty, fragmented messages coming through a transmitter radio.

“I like the whole sampling, soundbite kind of thing because it feels like it’s opening up the space of music to more events,” she explains. “The music is happening in a space where other things are happening – and that’s part of the music.”

The merging of art and everyday occurrences stems from Stech-Homsy’s diverse and unconventional background. She grew up in the harsh and rugged climate of northern New Mexico with her mother, a Ukrainian-Canadian flamenco dancer and costume designer. She also spent a lot of time in California with her late father, who was a gay Syrian-American painter and set designer.

After studying Russian poetry in college and doing translation work, Stech-Homsy began writing songs and recording them as a personal outlet. Untrained and self-taught, her music ended up in Devendra Banhart’s unlikely hands; he released her first album, Bride of Dynamite, in 2007 on his own label, Gnomonsong.

Falling almost accidentally into a musical career, Stech-Homsy believes that sometimes the most effortless path is the one you should take in life. And from her own experience, she placidly puts out this hope: “I wish more people made music, people who don’t think of themselves as musicians. Like you.”