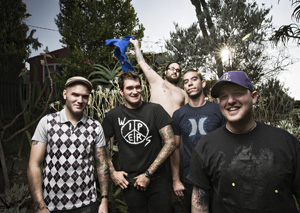 New Found Glory dare you to step into the ring and Fight.
(Credit: Dave Hill)

Fancying themselves to be pop-punk’s “reigning champs,” New Found Glory has titled their upcoming album Not Without a Fight. They’re also not wasting any opportunity to make boxing jokes about the album, said to be a “one-two knockout” and full of “fist-pumping hooks.”

They even staged a “weigh in” at the press conference to announce the new release. Fans can play a boxing video game at the band’s MySpace page, and this week the group launches a series of comedic “training videos” that’ll lead up to the release of a video of the album’s first single, “Listen to Your Friends.”

The full 12 rounds of Not Without a Fight take to the ring on March 10 courtesy of Epitaph.

New Jersey-based experimental/ambient/black metal outfit Ossein has a new double album out called Fuhrer, and they’re giving the music away as a free download through their MySpace page. According to the band’s frontman, Nile Bowie, Fuhrer is about “the God in man, oppressed by men playing God.”

If that’s not clear enough, Bowie goes on to say, “Our brains react differently when exposed to various sound frequencies, which alter our mood, opinions and consciousness. While some tracks on Fuhrer are accessible and song-based, many are heavily instrumental and may require patience for some listeners. Our goal is to inspire a variety of emotions and ideas, periods of self-reflection and ultimately altered states in our listeners.”

Former Screaming Trees (and occasional Nirvana) drummer Mark Pickerel is readying material for his third release on Bloodshot, and he’s bringing his Praying Hands band to the Knitting Factory to preview some of the songs. That’s not the only reason the show will be special though as Pickerel promises he’ll also be performing a couple duets with Suzi Jane Hokum, the vocalist who worked with prolific songwriter Lee Hazelwood before Nancy Sinatra came along.

Hokum, who also produced music for the original cosmic cowboy, Gram Parsons, hasn’t made this type of appearance in over 40 years. The show takes place Jan. 24 in the AlterKnit Lounge with Tom Schraeder and Russian singer Julia Vorontsova as openers.

Robin DiMaggio, the drummer and multi-instrumentalist who’s toured with stars like David Bowie, Johnny Cash, Steve Vai and Diana Ross has released an instructional DVD called Planet Groove. The disc contains 24 lessons that break things down to their simplest form so that would-be drummers can follow DiMaggio’s tips and tricks.

And if you happen to parlez Français you’ll be able to understand what’s going on since the lessons are given in French as well as English. DiMaggio’s next project will be the unveiling of the world’s first eco-friendly drumsticks sometime this spring followed by the release of his third solo album.

Longtime L.A. residents may remember the Source Family, a religious group of young people who ran a local health food restaurant and also performed improvisational music with father figure Father Yod. Father Yod passed away long ago, and Yahowa 13 had not performed for 30 years until recently.

Now, spurred on by the release of a book about the Source Family, Yahowa 13 original members Djin, Octavius and Sunflower are once again adjusting attitudes with improvised psychedelia dripping with mind-melting guitar, low end throb and cryptic chanting. Their reunion album is called Sonic Portation, and it’s available now from Prophase.