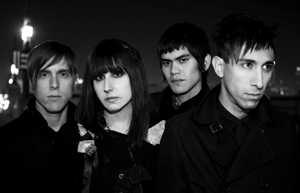 It must be a real pain to bear the brunt of titles like “next big thing.” How curious to go through life each day anointed with that special something most commonly known as the “It factor.”

Many people have buckled under the heat of their own flashpoint. However, a select few have conquered these phenomena while simultaneously maintaining – dare I say – a fantastic and humble personality.

Which gives rise to the ultimate question, “How do you do it, War Tapes? How DO you do it?” The answer to that query is best articulated in the eloquence of Becca Popkin, the band’s bassist.

Despite being the lone female in a group consisting of her buddy Matt Bennett (lead guitarist), her brother Neil Popkin (lead singer) and husband William Mohler (drummer), Becca has nothing to prove to the public or anyone else. Her music speaks for itself.

She greets me enthusiastically following a recent show at Spaceland in Silver Lake; which is somewhat surprising because this is another in a long line of late nights for War Tapes. After ending their set with the explosive track, “Mind Is Ugly” (in which Neil delivers a heart pounding series of lyrical screams before disappearing from the stage), the members immediately begin the arduous task of gathering their gear and making room for the next act.

Just weeks before our interview, these musicians took to the stage at another popular L.A. space (the world famous Troubadour), where they opened for Longwave. It’s been a nice and steady rise into the hearts of music lovers. The group has played shows with favorites like Tiger Army and the chart-topping Smashing Pumpkins.

However, War Tapes’ origins have much humbler beginnings.

“It started when Neil and I both moved to L.A. at the same time,” explains Becca.

Her brother managed to book a great gig, without actually having a band in place to back him. He didn’t have far to look for talent.

“We played a show – just the three of us – and had such an amazing time that we decided to do it all the time,” she says.

Bennett was later recruited to round out the pack, and the winning formula was created.

Their sound is a mix of the best of music’s past and present. Some have called War Tapes “the new Interpol.” Others label them an angst-ridden cross between Human League and She Wants Revenge.

Regardless, each member lends something special to the mix. Their habits and personality quirks are quick to arise during that all-important musical necessity: touring.

“On the road, we all have our rituals. I’m always scouting out every single vintage store all over the country,” admits Becca, laughing.

“Matt’s really into healthy food,” she continues, “so he’s always Yelp-ing every healthy restaurant in every town we travel to. William’s always on the scout for the nearest guitar shop and Neil sleeps all the time.”

Luckily, with such diversity in a quartet, love is the tie that binds. Like other family-rich acts (Kings of Leon, Eisley), War Tapes enjoy the security that evolves when playing alongside one’s nearest and dearest, as Becca explains.

“I think it’s probably the best of all situations because it’s already people that you love being with. At the same time, you can fight with them and argue with them and know that they’re not going anywhere, so it’s a great dynamic.”

War Tapes will perform Jan. 22 at the Roxy. For more information, visit myspace.com/wartapes.