Modern Skirts: All of Us in Our Night 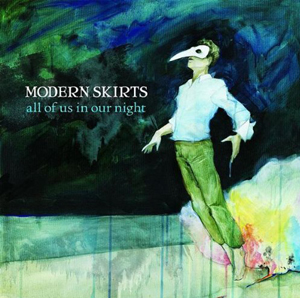 All of Us in Our Night, the latest album from Athens, Ga.-based quartet Modern Skirts, has quite a bit in its favor. Beyond the natural talent of the band, this album features one song produced by Mike Mills of R.E.M. and five songs produced by David Lowery of Cracker and Camper Van Beethoven. With all of this talent, Modern Skirts deliver an album of songs that are easy to like.

That said, the album itself is difficult to love. While it is full of rock tunes that feature unique tunes and harmonies, the songs suffer from being far too repetitive and understated.

Even the more dynamic songs on the album like the folk-influenced “Astronauts” and the faster-paced “Motorcade” seem like the more artistic, slow songs on a more fast-paced album. Slower tunes like “Chokehold” and “Conversational” repeat for far too long without much real growth.

All of Us in Our Night features some well-performed acoustic rock, but the album as a whole suffers from a lack of any dynamic change. It is a well-constructed album, but it takes patience to appreciate.

All of Us in Our Night is currently available.