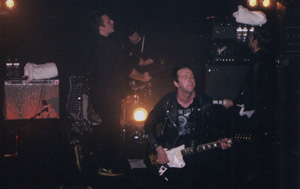 What every new band wants most when breaking it big is a large demographic of fans; people of all ages young and old to listen, enjoy and feel what the band is playing and saying.

What most new bands usually get when breaking it big is either a hipster crowd who will quickly forget about them and their music when the “next big band” comes along or a large fan base of teenagers who, although are important when talking about the future and the future of music, may not fully grasp as much what the band is saying.

Eschewing the trendy haircuts and skinny jeans, Glasvegas delivered what every band and fans of all ages wanted at the Troubadour.

Looking a bit like another band from overseas that once showed substance over trendy style, the Clash, but sounding more like Echo & the Bunnymen meets Jesus and Mary Chain with a dash of ’60s doo-wop thrown in, the “next big thing” from Glasgow put the next BIG BANG in 2009 with their melodic wall of sound.

Patrons of the sold-out show were treated to songs they knew such as “Geraldine” and “Daddy’s Gone” as well as an awesome rendition of the Shirelles’ 1960 classic “Will You Still Love Me Tomorrow.”

I will, as I’m sure will all else who attended this show, as well as many more who will by then be listening, enjoying and feeling what Glasvegas is playing and saying, definitely be at the next show, because unlike hipster bands and haircuts, classic sounds never get old.