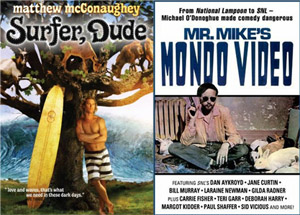 For some reason (the less bulky packaging?) DVD distributors feel that modern audiences have a compulsion to own the complete runs of shows that in the days of VHS would have been compiled in a couple of Best Of tapes and been done with. Not only that, but they are now splitting up individual seasons into two full-priced volumes.

My question: who is buying these things? Chances are “Matlock” devotees still call DVDs “tapes.”

Although the Not Ready For Primetime Players get most of the recognition, those groundbreaking sketches on “Saturday Night Live” weren’t writing themselves. Mr. Mike’s Mondo Video, the brainchild of Mike O’Donoghue, one of those founding writers, is seeing the light of day. Originally conceived to fill “Saturday Night”’s slot during summer hiatus, the bizarre, counter-culture parody of shock-documentary Mondo Cane was summarily rejected.

More weird than funny, Mondo throws together absurd sketches with surreal bits and images that sometimes travel into aggressively bad territory, as if O’Donoghue is daring you to hate it.

This is the kind of thing that you recommend not based on how good it is, but on how much of a cultural artifact it is. It also features: Bill Murray, Dan Aykroyd, Gilda Radner, Carrie Fisher and rare footage of Sid Vicious.

Extra features include Murray’s on-air eulogy for O’Donoghue. This is what DVD is for.

Perhaps no single show was more responsible for the explosive popularity of Japanese anime in the U.S than “Dragon Ball Z.” Now the first season of the follow-up series “Dragon Ball GT” comes to DVD.

While not as beloved as “DBZ,” “GT” still has a lot to offer. Goku (transformed into a kid) has one year to track down the Dragon Balls across the entire galaxy or the Earth will be destroyed.

Other new anime arrivals include: “Air Gear: Complete Series,” a fun little anime with an oddball sense of humor about a subculture of teens who race across the night in souped-up rollerblades. Also available: “Black Lagoon: Season 1,” an ultra-violent action show about modern-day pirates.

The funniest comedian working today, Louis C.K. returns with his second special, Chewed Up. It’s not his most inspired material, but fans will enjoy his typically scatological analysis of his aging body and his fresh rants on marriage and parenting.

And finally, this public health announcement: Avoid the cinematic plague known as Surfer, Dude at all costs. Masquerading as a film, it is actually just an excuse for Matthew McConaughey to walk around shirtless and barefoot, saying “Bra” a lot and making a bunch of pot references with fellow laid back actor dude Woody Harrelson.