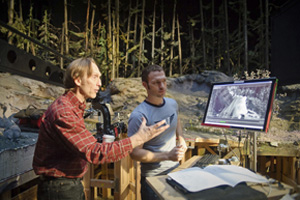 Coraline is about a young girl that wanders through a secret door in her home and discovers the “Other World,” a dangerous alternate reality that mimics her own life. When the Other World threatens to take over, Coraline relies on her own bravery and determination to save her family and herself.

“I think kids today are out of touch with Grimm’s Fairy Tales,” says Coraline’s director and writer, Henry Selick.

So, he made a film for what he calls, “brave children.”

Selick has crafted a remarkable, cautionary film that is imbued with the very best of Grimm’s sensibilities. It is also an animation milestone, being the first stop-motion animated feature to be conceived and filmed in 3-D.

“It was a pretty challenging learning curve,” Selick says. “I was lucky to have a good friend, Lenny Lipton. His system is at the center of RealD technology.”

Lipton has been working with 3-D since 1972 and met Selick nearly 20 years ago while working on a music video. Now, Lipton works at RealD, the leading 3-D company, and Selick enlisted his help on Coraline.

Selick says, “The technology of today’s 3-D really can now be called ‘stereoscopic,’ because audiences can now look at things with both eyes as we’re designed to do as human beings anyway.”

RealD uses a single projector that alternately projects right-eye frame and then left-eye frame. Each frame is projected three times at a very high frame-rate, thus reducing flicker and making an image appear to be continuous.

When viewed through the RealD glasses, each eye sees only its “own” image and the result is a seamless 3-D picture. It’s almost like looking into the window of a house and it lets a viewer experience a true depth of field. The process enhances stop-motion animation to a level that rivals that of a live-action movie.

Stop-motion is known for being an intense endeavor, couple that with the use of new technologies and you get a project that’s been a longtime in the making. Just 74 seconds of footage could take an entire week of production, with a crew of over 300 people working on 52 stages.

The shoot lasted over 18 months, which was after the two years of pre-production. The wait, however, was worth it.

“The first time I saw a 3-D footage test on Coraline, my jaw just dropped. I had never seen 3-D look so good,” says Coraline’s creator and author, Neil Gaiman.

The effect is marvelous to behold, and it really serves to help pull the audience into the movie, creating an immersive experience the likes of which audiences have yet to behold. It is easy to forget you’re watching a piece of animation.

Coraline has very little traditional or CG animation during its running time but relies solely on the art of stop-motion to tell the story. Everything is handmade and every movement is physically manipulated by any number of patient animators.

For instance, one amazing sequence takes place within a grand theater. The entire audience is made up of happy, panting Scottish Terriers.

There are 248 Scotties all in all, and each one requiring the individual attention of an artist. It is an amazing image, made all the more memorable when taking into account the work that made it possible.

“We can’t CG better than Pixar,” says Selick, “so we made everything: all the dogs, all of the jumping mice.”

“What I didn’t realize until I visited the sets out in Oregon,” says Gaiman, “was that absolutely everything you see on the screen had to be made after being designed or signed off on. Every blade of grass had to be painted or built out of fake fur.”

Forty trees were handmade for the orchard setting. Silicone thimbles were turned inside out and painted to become garden lilies. Thirteen hundred square feet of fake fur was applied and painted to stand in for live and/or dead grass. Even the construction of a single Coraline puppet took the work of 10 people over the course of three to four months.

To say that Coraline is the biggest production in stop-motion animation is an understatement.

“With miniature puppets, miniature props and miniature sets, Coraline’s two complete worlds were brought to life,” says Selick. “Everything had to be thought out.”

“Stop-motion combines imagination with a tangible reality and solidity,” says Gaiman, “and Henry’s work in the medium catches my heart.”

Selick has been active in animation for quite a long time and got his start as an animator at Disney, though he is best known for directing the stop-motion classic, The Nightmare Before Christmas. That film was released in 1993 and has gone onto become a perennial favorite. It was even re-released by Disney in the 3-D format.

“I thought it would be impossible to do,” says Selick, “but they pulled it off.”

Coraline isn’t just an amazing achievement on a technical level; it is a fantastic movie that will surely win over the same audience that championed The Nightmare Before Christmas. It has a childlike sense of wonder, surprising humor and exceptional voice work by Dakota Fanning and Teri Hatcher.

The score, too, is startlingly original for an animated movie and is supplied by the talented Bruno Coulais, composer of Winged Migration and Microcosmos.

This handmade fairy tale will amaze you.