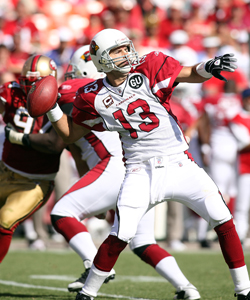 Long before Coors Light epitomized his press conference rant in commercial form, Jim Mora’s famous words – delivered in a high-pitched voice – were probably written on a white board inside the Arizona Cardinals locker room shortly after he uttered them in 2001.

“What’s that? Uh – Playoffs? Don’t talk about – playoffs? You kidding me? Playoffs?”

The Cardinals won more playoff games in 2009 (three) than they had in their entire history in the NFL (two).

Since moving to Arizona, the Cardinals qualified for the playoffs just once – in 1994. Factoring in the St. Louis days, the team had four playoff appearances, playing five games in the process. For the Cardinals, the playoffs sound a lot like Mora’s words – something to kid about.

The big game, which will be played in Tampa Bay, Fla., is perhaps the most intriguing Super Bowl match-up in recent memory. Both teams have met only eight times in the last 36 years, with the Steelers winning five of the meetings.

Both teams are operated by families with a long-standing history of NFL ownership. Both teams are led by two coaches ushering in a new era of X’s and O’s. Both teams have a stable of wide receivers capable of burning defenses.

Perhaps that is where the similarities end.

Arizona entered the playoffs with the worst running game in the league and a porous secondary. The Cardinals averaged a league-worst 73 rushing yards per game on 16 carries.

In its final six games, Arizona gave up at least 30 points four times, including 48 to Philadelphia and 47 to New England. The Cardinals also allowed 56 points to the Jets on Sept. 28.

Conversely, the Steelers gave up more than 30 points once all season – a 31-14 loss to Tennessee in week 16. Unlike Arizona, Pittsburgh’s defense is arguably the best in the league. In their final seven weeks, the Steelers allowed less than an average of 12 points per game, while the defense ranked first in total yards, passing yards, points allowed per game and second in rushing yards per game (at just over 80 per game).

The key to Super Bowl XLIII will be whether Warner can figure out the Steelers defense. Pittsburgh’s front five should have no time limiting Arizona’s weak ground game, and if the safeties and corners can control Boldin and Fitzgerald, Arizona will be run out of Tampa.

Conversely, the key for Arizona is to blitz. Halfback Willie Parker has been inconsistent on the ground, and Roethlisberger struggles against the blitz. He was sacked 29 times during the season, and threw five interceptions on 50 percent completions against the blitz.

Ultimately, the Steelers defense should carry the day for Pittsburgh, as it will be the first NFL team to win six Super Bowls.