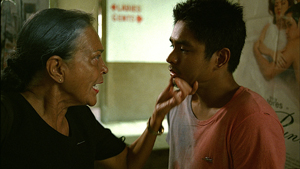 Every family has problems, be they financial, emotional or in some cases, sexual. The Pineda family is no exception.

Directed by Brillante Ma Mendoza, Serbis, which evidently is the Filipino pronunciation of service in English, follows a day in life of the characters as they each struggle with their own problems and insecurities while operating the theater. Here, as with any other films directed by Mendoza (Masahista, Kaleldo, Monoro and Tirador), the camera follows each character as they walk around the building, so much, that by the end of the movie the viewers have a good idea about the layout of the theater; a detail that, according to the director, is essential in interpreting the many facets of the characters.