All the Mighty World: The Photographs of Roger Fenton, 1852-1860: Ongoing through April 24 @ The Getty Center, West Pavilion, Plaza Level 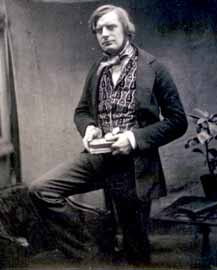 At 5 feet 5 inches tall and coming in at just over 105 pounds, the entire world seems mighty to me. The Hollywood Hills are Hollywood Mountains. The Santa Monica Boardwalk is a Boardmarathon. So, it was with severe apprehension that I approached The Getty’s exhibit All the Mighty World: The Photographs of Roger Fenton, 1852-1860.

As with seemingly every person born in the 1800s, Fenton (British, 1819-1869) was also a lawyer (really, how many times do you come across historical figures to learn they practiced law … it seems like everyone practiced law in the 1800s. I think they handed out JDs upon birth). Fenton began his career with portraits of family and friends around London before accepting an invitation to Russia where he discovered he was one of the first photographers to train his camera on Moscow and St. Petersburg. Some might say that this artist’s interest in Russia set the groundwork for Billy Joel’s later obsession with the former U.S.S.R. (Well, I would say that.)

Some others may call Fenton the Mathew Brady of the Crimean War. In 1852, England, France and Turkey were fighting a war against Russia. Fenton was commissioned to capture the war and produced several hundred portraits and images of encampments and battle sites and, this being a few years before Brady, became the first photo-documentarian of any battle.

Most striking is the image "Valley of the Shadow of Death," where hundreds of cannonballs have found their final resting place. Fenton wrote a letter – available at the museum and online – in which he details why this canonical (pun intended) image is a metaphor for war. Unable to photograph the dead (Victorian sensibilities) each ball is another dead soldier.