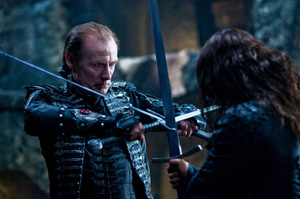 Underworld: Rise of the Lycans is the third film in the Underworld franchise, though it’s not a direct sequel. This film takes place centuries before the first and second film and chronicles events that will lead to a war between the vampire and werewolf clans.

The film tells the story of an enslaved werewolf, Lucian (Michael Sheen), and his secret affair with the vampire Sonja (Rhona Mitra), daughter to the cruel vampire king, Viktor (Bill Nighy). The story is a melodramatic tragedy with monsters that veer closer to fantasy than horror, but the film has a fast pace and good production values, both of which go a long way in bolstering a so-so screenplay.

The real fun in this Underworld is in watching Sheen and Nighy chew through the scenery and really invest themselves in the whole affair. Their work was the high point of the first Underworld (sorry, Kate Beckinsale), and it’s nice to see them take center stage.

The creature effects are admirable, though CGI is still a weak replacement for good old practical effects.

Underworld: Rise of the Lycans is currently in theaters.