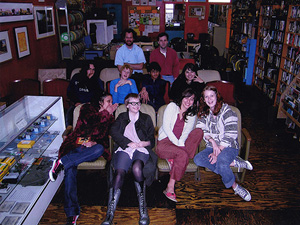 The Echo Park Film Center is an invaluable community resource. In addition to being a nonprofit rent-a-center, library and screening facility, the blue and orange storefront also offers free classes, workshops and after-school programs to introduce neighborhood teens to “the magic of cinema.”

In a movie event born from truly inspiring circumstances (think Dangerous Minds except Michelle Pfeiffer is instead a gaggle of film-nerd volunteers), the resulting shorts from both of last semester’s programs will be screened –with all underage filmmakers present – in a one-night only homespun movie extravaganza.

Equally as fulfilling for the EPFC crew as for the newly spawned filmmakers, the free screening of Show & Tell/FILMS From Mar Vista Gardens is sure to prove the value of such after-school programs and be an uplifting glimpse into the power of media arts. 8 p.m.