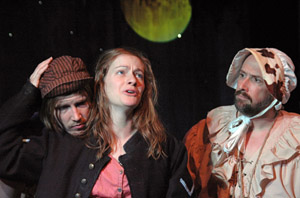 With all the tragedy surrounding us, when is the right time to bring a new life into the world? That is the question that Martha (a superb Suzy Jane Hunt) asks herself in Jim Leonard’s “Battle Hymn.”

The question, for Martha, is more difficult than for most; she decides to stay pregnant for 150 years! The premise may sound absurd. To be fair, the play contains some downright silly moments, but there is dark subtext in Leonard’s frothy script.

The story follows Martha, an antebellum belle, from the Civil War to the fall of the Twin Towers.

[Inside] the Ford is located at 2580 Cahuenga Blvd. East, Hollywood. For more information, visit fordamphitheater.org.