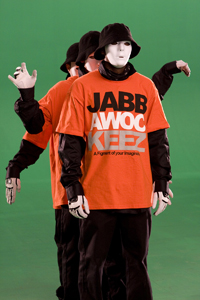 As hip-hop dance culture infiltrates the mainstream in films like Step Up 2: The Streets and Rize, and on national television with “So You Think You Can Dance” and “America’s Best Dance Crew,” the JabbaWockeeZ have become the masked faces of a new movement, anonymous ambassadors to b-boy culture.

The crew has been dancing together since 2003 but burst into public consciousness on the first season of “ABDC,” a show on MTV that debuted in 2008 with little fanfare, but quickly gained a rabid following, largely because of the mind-blowing routines the JabbaWockeeZ unveiled week after week.

Since winning the title of Best Crew, $100,000 and a touring contract, life for the Jabbas has been a whirlwind. In the midst of preparing for an appearance on the premiere episode of the third season of “ABDC,” having just returned from a Canadian tour and deeply entrenched in launching their new clothing line, Ben “B-Tek” Chung and Chris “Cristyles” Gatdula took a moment to talk about what Chris dubbed their “beautiful struggle.”

Despite their newfound success, the JabbaWockeeZ suffered the loss of Gary Kendall, whom they call “their glue,” just before the start of “ABDC.” His absence permeated every routine, each of which ended with their fingers pointed to the sky in tribute to Kendall, and has lingered over them since.

“It was hard, but it wasn’t the dancing, the physical stuff, that got to us. It was more mentally draining because of Gary being gone. Before he passed away, he said, ‘We need to do the show.’ He was really pushing for us … but he was supposed to be here,’” Gatdula says quietly, still moved by the memory of his dear friend.

Chung reveals, “There were moments where we were just hitting walls and, I’m not even gonna lie, to the point where people were like, ‘Man, I just want to quit. Are you guys cool with that?’ and we’d say, ‘What are you talking about? We have to stick through this!’”

What got them through everything, from physical exhaustion to overwhelming grief, was their devotion to each other.

“There were times where we sat down and were just in tears together,” Chung says. “For me, that’s what I remember from the show; us being there for each other, encouraging each other. Because there’s always somebody that wasn’t feeling it, and it took the energy of everybody else to pick that person up. That made us even tighter as brothers.”

Their bond is undeniable, especially when watching one of their performances, as six men move in perfect harmony like one large organism. It’s a feat that’s impressive enough but especially when you consider that their signature masks have one acute drawback; extremely limited vision, which means they can’t see what’s happening around them onstage.

“Sometimes your vision is completely gone because the mask slips down your face and the eye holes are on your cheeks so you literally have to go by feeling,” Chung laughs.

That extraordinary and uncanny ability to remain in sync may be one of the reasons for the JabbaWockeeZ’s popularity but Chung says, “I see us as live action cartoon characters, like superheroes who can do magic tricks. There are stereotypes about male dancers and it being a feminine sort of thing but, if you watch what we do, I don’t think there’s anything feminine about it. And everybody knows girls like guys who can dance.”

The JabbaWockeeZ will be signing the latest products from their clothing line “JBWK” at the Shiekh store in Fox Hills Mall Jan. 30 from 5 p.m.-7 p.m. For more information, visit jbwkz.com.