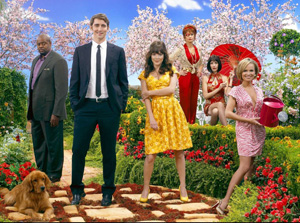 Dearest TV junkies, we are gathered here today to mourn the loss of one of television’s most beautifully art directed shows, “Pushing Daisies.” So long to the lusciously colored sets, Ned (Lee Pace) and Chuck’s (Anna Friel) forbidden touching, Olive’s (Kristin Chenoweth) random breaking out into song and oh, the pie. The pie!

ABC has not announced when the final episodes of the series will air, but Chenoweth says these last shows won’t wrap up all of the existing plotlines. She hints that creator Bryan Fuller has an idea for a film that would answer all of the unresolved questions, though. Here’s to hoping the clever program is brought back to life on the big screen.

Both men are super intelligent but socially inept and share a love for science that oftentimes outweighs compassion for and understanding of others. Their unfiltered comments add wit and sarcasm to moments that would otherwise be way too serious.

As an example, witness House’s response to his boss as she asks him when was the last time he showered: “Scent of a man. I realize you haven’t experienced it sober.” And Walter’s “I just pissed myself … just a squirt” line has secured its place in TV infamy.

Side notes about “Fringe:” Who knew that Joshua Jackson (who will always be Pacey to me) would turn out to be one of the two actors from “Dawson’s Creek” to best hone their crafts? (Michelle Williams being the other.) And just like on J.J. Abrams’ other shows, it’s always fun to look for hidden “inside jokes.” See if you can spot the bald guy with no eyebrows, the Observer, in the background of scenes and find the hidden pictures in the X-ray images that flash at every commercial break.