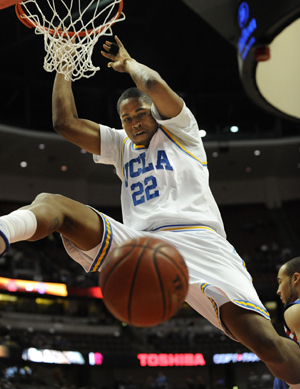 Whenever UCLA and USC athletics meet, team records are thrown out the door. Rarely does one school find itself caught in the other team’s dominance in a sport like a deer caught in headlights.

If the basketball contest between the two schools at Galen Center two weeks ago is an indicator, it is unlikely USC will just fold over and let UCLA run over them like road kill when the Trojans take to the hardwood at Pauley Pavilion Feb. 4.

On Jan. 11, the Bruins escaped University Park with a 64-60 victory, part of a nine-game winning streak that had UCLA eyeing a position in the spot near the top of the national polls.

As both teams prepare for a re-match at Pauley Pavilion, UCLA hopes to reverse its losing ways, while USC hopes to avenge the earlier loss to its crosstown rival (and keep up in the Pac-10 standings in the process).

The Bruins (15-4, 5-2 in conference) have dropped two of their last three games since winning nine in a row, including losing their fifth straight game in Seattle against Washington on Saturday. With consecutive losses to PAC-10 teams, UCLA is now in the middle of the pack, allowing a team like USC to affect the final standings heading into the season-ending tournament.

Southern Cal is 4-3 in PAC-10 play (13-6 overall), meaning that if both schools defeat their next two opponents, the Trojans can leapfrog UCLA in the conference standings and almost prevent the Bruins from claiming the best record among the league’s 10 teams. As if playing against a crosstown rival on its famed home court is not motivation enough, expect USC to be extra motivated with the PAC-10 title on the line.

Both teams are relatively healthy entering this week’s games, so injuries should not be a major factor. Expect another close game, with UCLA barely escaping for the season sweep.