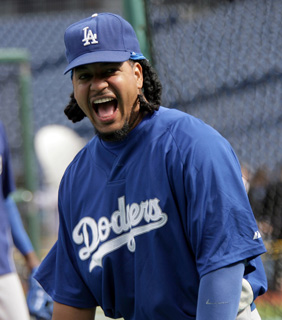 Will Manny Ramirez be back in Dodger blue?
(Credit: Yong Kim/Philadelphia Daily News/MCT)

Less than 20 days remain until the Dodgers begin spring training in their new facility in Glendale, Ariz. Yet, the Dodgers still have not signed Ramirez, nor have they added more depth to their bullpen or starting pitching.

With the current roster, the Dodgers are true contenders in the NL West. However, adding Ramirez makes them favorites to win the division and perhaps perform slightly better than the squad did last season in the playoffs.

Bringing Ramirez back would signify belief and hope for all those miserable fans who have not seen the team in a World Series since 1988.

Bringing the dreadlocks back would mean that the rest of the players would enjoy and have fun playing baseball alongside the Dominican. Bringing back the future Hall of Famer would alleviate many of Joe Torre’s worries, not to mention Don Mattingly’s efforts to improve the hitting abilities of all the club’s youngsters.

Bringing back that unique Latin charismatic leadership would transform the Dodgers into a nightmare for most NL teams, including the Mets and Phillies. Bringing back the so-called “Manny being Manny” concept would enhance the Dodgers financial wealth, too.

Whom should the Dodgers target? Reports indicate that they are in talks with starting pitchers Randy Wolf, John Garland and Braden Looper.