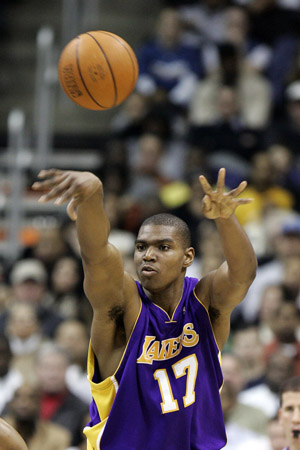 The 35-8 LAKERS are taking care of business at Staples. The league’s top offensive team is – finally – stepping up its game on the other end of the court. The Lakers still need to up their toughness quotient, but the past few games have been steps in the right direction.

On Thursday Bryant was named as a starter for the 2009 NBA All-Star game, for the 11th consecutive time. That night, the Lakers blew out the Washington Wizards (9-35) 117 to 97 at Staples Center. Bynum had another fantastic game, coming away with 23 points and 14 rebounds. Pau Gasol put up 18 points.

Sunday afternoon at Staples was the setting for the west’s top team to take on the second –best Spurs (29-14). The game was close until the Lakers pulled away just before the half and opened up a 15-point lead in the third and then winning 99-85.

Bryant led with 22 points, Trevor Ariza scored 17 off the bench and Gasol ended up with 16 points, five rebounds and four assists. Bynum had a season-high four blocked shots. Backup point guard Jordan Farmar returned for his first game since suffering a knee injury Dec. 19 in Miami and scored 14 points in 17 minutes of play.

After their loss to the Lakers, the CLIPPERS pulled off a win over 10-35 Oklahoma City on Friday at Staples. Last season’s rookie of the year, Kevin Durant had 46 points and 15 rebounds for the Thunder and made 24 out of 26 free throws, but it was the Clippers’ rookie guard Eric Gordon who stole the show, and came away with the win.

Gordon sunk a three-pointer and a scoop shot in the final four minutes of the game – his tally at the end of the night was 41 – leading the Clips to a 107-104 victory. Clippers forward Al Thornton had 34 points.

PLAYER OF THE WEEK: ANDREW BYNUM

On Jan. 21, the seven-footer became the first Lakers player to score 40 points, besides Bryant, since Shaquille O’Neal back in 2003. Bynum steadily continues to improve his rebounding numbers (averaging 13.3 rebounds in the last three games), his intensity as a defender and his confidence as an overall dynamic force on this team. And have we mentioned that he is only 21 years old?