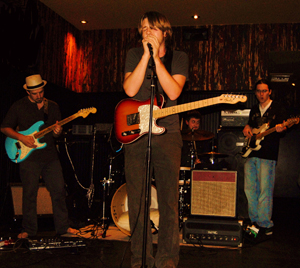 At first glance, singer Mike Officer and his band mates are a bunch of average Joes walking around Los Angeles. They’re free of the latest fashions, opting for plain, worn-in jeans, tattered dickies, T-shirts and flannels.

Some of them haven’t had haircuts in months – maybe even years. I mean, to be blatantly honest, you probably wouldn’t be able to pick one member of this band out of a crowd with a pair of binoculars and a GPS device.

However, when these four boys take to the stage, equipped with drumsticks, strapped into their guitars, something ... magical happens. The heavens open wide; God says, “Bibbidi-bobbidi-boo!,” and the next thing you know, you’re now a stunned bystander in the presence of serious musical greatness. M.O.B. gives off the passion and magnificence that wowed audiences back in the ’90s when acts like Jeff Buckley and Coldplay first started to command attention. This type of dynamic makes perfect sense for seasoned professionals who have played alongside each other for years and years. But for Officer and his mates, their onstage chemistry is truly a blessing.

“To be honest, we’ve only been together [a few] months. We’re, like, brand new,” says Officer, following a recent show at Molly Malone’s pub in Los Angeles.  He is backed by drummer Dan Jones, bassist Ben Bradshaw and guitarist Jason “Blu J” Thomason. Given its successful formula, the Mike Officer Band has settled on a busy future consisting of a return to the studio to record additional material as well as a pending video shoot. The group has also won some serious validation, having been picked as the opening act for blues legend B.B. King on his recent U.S. tour. But it’s the music – a fusion of soul, funk, alternative and classic rock – that emerges the crowning achievement of this collective. Their set includes covers of songs by greats like Stevie Wonder and Soulive. There are also spectacular originals like “Bird on a Wire” and “Neon Skies” that really drive home the skill and creativity of these performers.

Officer confesses that the themes of the music are sometimes emotional in nature.