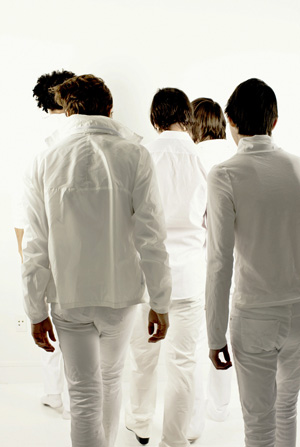 The Morning After Girls

Dance with the Bacon Brothers

The Bacon Brothers have announced the “Bacon Brothers Dance-Off Video Contest” whereby they are encouraging fans to make a video of themselves dancing to the group’s latest single, “Go My Way (the iPod Song).”

The song is from the new Bacon Brothers album New Year’s Day, currently available as a download only. Entrants need to purchase the song at iTunes or Amazon, make a video that shows off their hottest dance moves and then upload the clip to the Bacon Brothers contest group page at YouTube.

Prizes for the winners include the iPod Touch or a chance to dance live with the group. The big winner will also have portions of their clip edited into a new version of the “Go My Way” video.

The Bacon Brothers play rock with a blue-collar edge and New Year’s Day, their sixth album, will see a physical release in March.

My Chemical Romance has recorded a cover version of Bob Dylan’s “Desolation Row” that will be featured in the upcoming feature film, Watchmen. The song will be available on the movie’s soundtrack, but Warner Sunset/Reprise has already released “Desolation Row” as the A-side of a special 12-inch vinyl picture disc. The disc’s B-side will feature another song taken from the film’s score, “Prison Fight” by composer Tyler Bates.

Watchmen is based on the graphic novel of the same name that was co-created by Dave Gibbons and published by DC Comics. The film releases on March 6.

There are lots of bands that’ll tell you their music is “outta this world,” but there’s no arguing the fact when the band in question is named From Jupiter. Actually the band is originally from Vermont, but their launch pad is now located in Santa Barbara.

The band plays emo with a hard rocking edge, and they enlisted producer Andrew Murdock, aka Mudrock (Avenged Sevenfold, Godsmack, Alice Cooper) to fire the booster rockets on their upcoming self-titled release.

Drummer Chris Laplante says, “Mudrock knows his way around the board like an astronaut in a spaceship; he’s a blast to watch.”

One of the new From Jupiter songs is called “Rocket Boy,” but mostly you can expect subject matter that’s more down-to-earth, like that found in tunes like “My Teen Angst Ballad” and “I Can Do It Better.” From Jupiter drops on Jan. 28.

Live EP for My Morning Jacket

Live at the Palms is the name of the new six-song EP from My Morning Jacket. The material was recorded in Las Vegas, and the set list includes a previously unreleased song called “Dear Wife” and a version of the rarely performed “Tonight I Want to Celebrate with You.”

Singer Jim James says, “The purpose of this EP is to provide the listener with a sensual and deeply personal method for relaxational listening. It’s to be enjoyed on a candle-lit bench, in a secluded nook or at a sensuous dinner party.”

Live at the Palms is available exclusively at iTunes.

The Morning After Girls

There are no girls in the band, but there are a few new fellows. Singers and multi-instrumentalists Martin B. Sleeman and Sacha Lucashenko have added a drummer, bass player and a keys man to the group, and they’ve relocated the whole lot to New York from their native Australia.

A new album is in the works, and the Girls plan on previewing material from it when they play a showcase at the Viper Room Jan. 29.