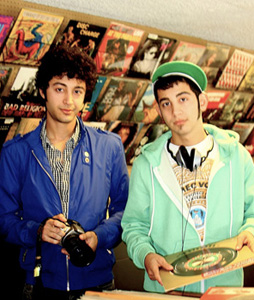 My brother and I are native Angelenos, born and raised in the section of the 818 known as Burbank. But living in Los Angeles has always had one disadvantage – we’ve constantly been bombarded by the nukes launched by the military base known as mainstream Hollywood.

The pop culture of Los Angeles, though “entertaining” to the oblivious, forced us to seek out music that may not be as familiar to others. We shed the mainstream scene like dead skin and stepped into the underground ... scene that is.

Our epiphany: Seeing the robotic electronic duo known as Daft Punk at Coachella 2006. The crowd at Coachella mostly consisted of rock music fans like us. But after the show, we emerged with a new brand of music stuck in our ears – and we didn’t want to get it out.

That was quite a life-changing experience, as most people who saw the spectacle would probably agree with. We left the show with new birthmarks on us that continue to demonstrate our newfound love for electronic music. But also the sheer magnitude of the presentation of the show has since left an ever-radiating impact on the music scene in Los Angeles that still continues to ripple and draw in new fans.

With a new musical environment all around us, we decided to become a part of the movement and capture as many moments as we can on camera. That new desire eventually grew to us wanting to share those moments on our Web site, ClubSoda.fm.

Since launching our Web site last June, we’ve made it our mission to go to the best electronic shows in and around Los Angeles and share our experiences with others who feel the same about the scene. But although photography is our new passion, we will always first be fans of music. —Shaunt Gharibian