He's Just Not That Into You: Nine Stories About the Jacked-Up World of Dating 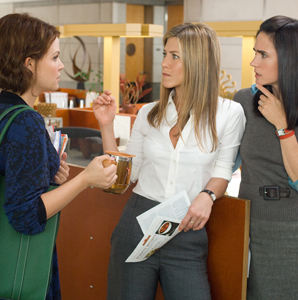 What do Drew Barrymore, Ben Affleck, Jimmy Fallon’s wife and “Sex and the City” have in common? Perhaps more than you think.

It was adapted from the best-selling book of the same title penned by Greg Behrendt and Liz Tuccillo, two former “SATC” writers who coined the phrase in a memorable episode of the hit HBO series. And it’s brought to the big screen by the dynamic duo of Nancy Juvonen (that’s Mrs. Fallon to you) and her Flower Films producing partner, Barrymore.

Now that we’ve settled the semantics, let’s move on to the dating.

Gigi is a real sweetheart of a girl who just can’t seem to find Mr. Right. She dates and dates, putting her heart out there – only to have it stomped on by every ne’er-do-well within the Tri-State area. After a blind date, which results in NO follow-up phone call from her object of desire, she enlists the help of Alex.

He’s her new best guy friend who manages to keep it real with her about the men in her life. Gigi works with Janine and Beth at a Baltimore ad agency.

Beth has been living with Neil for seven years, and he still hasn’t popped the question. Janine is married to Ben, Neil’s best friend. They got hitched straight out of college and are finding that wedded bliss isn’t so blissful.

That’s when Neil meets Anna by chance while grocery shopping one night. Men and women can be JUST friends, right? RIGHT?!?!

Anna thinks so. She’s had Conor in the “friend zone” for longer than he’d like to admit out loud.

And poor Mary; as Anna’s best buddy, she’s lost in a sea of online dating, social networking sites and e-mail etiquette dos and don’ts that make absolutely no sense to her whatsoever.

He’s Just Not That Into You prides itself on being a “chick flick” for a new generation. Gone are the makeover montages and choreography (R.I.P. Bend and Snap). Those cherished cinematic devices have been replaced by a slew of young men and women facing real issues with universal appeal.

“I fell madly in love with Gigi and found her completely endearing,” admits Goodwin. “Gigi is quite eager to find her soulmate and get married and live happily ever after, but she has been grossly uneducated in the realities of relationships. She’s been taught all the wrong signs and over-analyzes and obsesses about it. She will commit to something and ride that train as far as it will go, right or wrong. She’s very resilient.”

Connolly’s character is in many ways the male counterpart to Goodwin’s Gigi. However, the filmmakers wanted to be careful about not making Conor come across as too much of a nice guy.

“We didn’t want Conor to be a puppy dog when it came to Anna, but to have him be this guy who really had a plan,” says Juvonen.

As for Johannson, who is the youngest member of the cast, she looks at her character with compassionate eyes, in spite of the affair that develops between Anna and Cooper’s Ben.

“You can’t hate them because I don’t think they go into it with malice,” says the actress.

Much to director Ken Kwapis’ credit, he keeps each role in the script likable, despite some pretty outrageous behavior. Several of the more memorable scenarios involve Barrymore, who was so smitten with Mary that she knew she’d found her niche within the project.

“Everything happens organically for a reason, so I felt like a Mary,” she says.

The actress-producer, who was romantically linked to Long during the filming of the project (the couple have since called it quits), is even quick to dish out good advice on where to meet nice people for all the lovelorn men and women who haven’t been so lucky making a proper match.

“I go see bands play all the time,” she offers, adding that live music venues might be a great place to start.

Cooper reveals his favorite hookup spot – which borrows from his onscreen counterpart.

As for nursing that broken heart when cupid’s arrow turns from pretty to poisoned, Goodwin admits that she has often had to rely on the kindness of her loved ones.

“I’ve had sisters and girlfriends literally come pick me up from break-up locations,” she says.

So to review: If he’s flirting with you one minute, but macks on your best friend seconds later; if you went on a date Sunday, and he still hasn’t called you back by the following Saturday night; if he breaks dates constantly at a moment’s notice, or if he blows hot one minute and cold the next, don’t take it personally: He’s Just Not That Into You.

He’s Just Not That Into You releases in theaters Feb. 6.