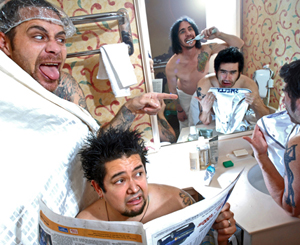 Twenty-five years. That’s longer than most countries hold onto their status. So, how does a punk rock band from California manage to stay together after all these years?

According to vocalist/bassist Fat Mike, “It’s just about doing what we love. When we were starting out playing shows for $60 a night, it wasn’t for the cash. So why should that change?”

The uncompromising attitude that resonates with NOFX is something missing from the rock world today. So, when a band is celebrating their quarter century milestone, it’s something that people notice whether they’re fans or not.

Starting out in Los Angeles, the band released a seven-inch, and in 1988 they released their first LP before signing with Epitaph. The band stayed with the label until 2000 before moving over to Fat Mike’s Fat Wreck Chords. With bands lining up to get Fat Wreck, NOFX gained more and more momentum and credibility in the music world.

For years they toured and left a path of destruction in their wake. Then a few years ago, the band decided to let the rest of the world in on the madness by taking two cameramen on tour.

The footage shot in the two-year stint was to be used for a DVD, but with so much good footage the band thought it should be made into a TV show. Taking 600 hours of footage in hand, NOFX approached FuseTV to create, or as Fat Mike puts it, “edit the footage and make it into a show.”

“NOFX: Backstage Passport” is the final product, a docu-reality series that is something no other band has been able to create thus far.

“Fuse tried to do the same thing with other bands, but they aren’t as entertaining as us. Other bands won’t show drug use, and they aren’t particularly funny to begin with. They are young and haven’t lived life long enough,” says Mike.

His words lead to more than just the topic of TV show production, they speak to a much bigger issue: the quality of music today.

“It’s kind of sad that bands are so concerned about their careers. They tone down their music like they tone down themselves. You can’t go on a big rock tour and go crazy anymore. It’s like we’re in our own little world,” he says.

With that kind of insight it’s easy to see why people gravitate to a band like NOFX. They sing songs about real life, not afraid to push the limits of religion or politics to make cash.

Asked for an example of what’s wrong with music today, Mike comes back with a very specific case in point: “Avenged Sevenfold is the epitome of what’s wrong with rock and roll. They support Bush. Support the Iraq War. Wouldn’t accept a drink ’cause they have to play the next day, but tell everyone they party. And play to a fucking DAT tape. However, a couple of them are decent poker players.”

That kind of honesty in answers is something most don’t find. With so many bands out there vying for a place in your iPod, it’s tough to take time and see who is really giving you everything that they’re selling.

That’s why you have to see this band live. It’s like nothing else out there. From the outrageous antics that play out on stage to the brutally perfect sound, NOFX is doing what others only dream about.

So, when the Los Angeles shows come around, make sure to get your tickets early, because when these guys play in their hometown … it’s going to be a show like you’ve never seen.

Backstage Passport will be available March 17 on DVD. NOFX will perform Feb. 5, 6 and 8 at Henry Fonda Theater. For more information, visit nofxofficialwebsite.com.