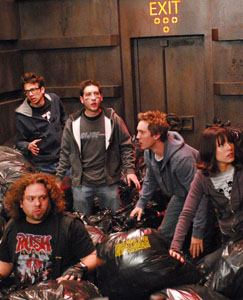 In Kyle Newman’s Fanboys, the year is 1998, and there’s only one thing on every geek’s mind; the eminent release of Star Wars: Episode I. Sam Huntington, Chris Marquette, Dan Fogler and Jay Baruchel star as lifelong friends and diehard Star Wars fans who set off on a cross country road trip with a mission: to break into Skywalker Ranch and steal an early print of the film, partially because they can’t wait any longer, but mainly because one of them is dying of cancer.

Newman’s long delayed, highly anticipated film finally arrives Feb. 6, 18 months after it was originally slated to premiere, following an arduous uphill battle that included re-shoots with a new director and major disagreements over the film’s content, vulgarity and the cancer plotline, which Newman fought long and hard to maintain.

But everything about making Fanboys was, admittedly, a battle for the director.

“It was hard,” Newman says. “[I remember] going up to shoot at Skywalker Ranch with no resources. You get to shoot in the most amazing place, but I’m lighting the foreground with car headlights. It’s the story of the movie. Somehow we pulled it off, but we didn’t have the support behind us to do it as well as we’d liked.”

Given their limited budget, Newman was forced to shoot the film in 27 days over 53 locations, and he was restricted to just three takes per shot, a task which proved incredibly frustrating.

“You get Seth Rogen and Dan Fogler and everybody going in a scene and it’s awesome, and just as you’re hitting full stride you have to move on. I felt like sometimes I was just sketching.”

Despite these trials, as the movie, which the cast describes as “Kyle’s Baby,” finally making its way to theaters, Newman is quick to honor his muse.

“I am a lifelong fan of Star Wars,” he says, reverently.

“Kyle is a wealth of information about all that is geekdom,” Huntington blurts.

“I was born in 1976 so my first memory is after I saw Star Wars at a drive-in in New Jersey, and everyone was going crazy,” Newman recalls. “I don’t necessarily remember the visuals of the movie, I just remember the energy.”

Newman says he’s spent his entire life trying to emulate Star Wars, and this movie was an opportunity to not only pay homage but to recreate some of the series’ most iconic scenes. Fanboys features a ton of memorable cameos, including Jay and Silent Bob, William Shatner and Seth Rogen, but no one proved quite as exciting as Carrie Fisher, with whom Chris Marquette got to reenact the famous “I love you”/“I know” scene from The Empire Strikes Back.

“I used to have this fantasy growing up,” Dan Fogler admits, “where Princess Leia would be in the slave Leia costume and she would be in a vat of Breyers mint chocolate chip ice cream. [It was] a recurring dream where I would eat my way to her.”

“I remember sitting alone in my hotel room the next day thinking, ‘I can’t believe I got to grow up and say that line, on-camera, to the person who said that line’,” Marquette recounts breathlessly.

“I think people are going to shit themselves,” Huntington erupts. “All the references, there’s so many homages, it’s endless.”

“It was a dream come true,” Fogler agrees. “So many times in this movie I thought, ‘I can’t believe I’m getting to pay homage to this moment.’”

Despite their adoration of Star Wars, Newman insists that’s not what’s central to Fanboys.

“Star Wars is the through line, it’s the bond,” he explains. “But it’s about the friendship.”