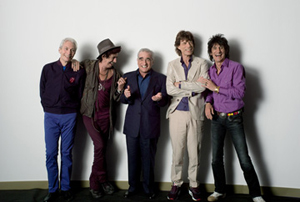 The Rolling Stones’ history with film is almost as storied as theirs with music. With nearly as many feature film appearances as studio albums under their belts, the bad boys of the British Invasion were a favorite subject of avant-garde and experimental filmmakers from around the world.

To celebrate the Stones’ multi-faceted film careers – and the use of these films to propagate their popularity – the USC School of Cinematic Arts is having a two-day film festival that will be more than just concert footage and jukebox movies.

At the height of their careers, the Stones were featured in everything from documentaries to experimental shorts and four of the best – along with several assorted videos – are being screened this weekend; “Rolling Stones on Film” is an ode to both the musical and visual impact of the band.

Friday night’s double feature includes Performance (1970) – a controversial film where Mick Jagger plays an androgynous London druggie – and Jean-Luc Godard’s Sympathy for the Devil (1968), a half-umentary of the recording process of the title song interspersed with Marxist and Black Panther propaganda clips (the intention of which is still unclear).

Saturday, however, is an all-day affair. After scenes from The T.A.M.I Show (1964) and Kenneth Anger’s Jagger-soundtracked short Invocation of My Demon Brother (1969), there will be a 2 p.m. showing of the famously self-reflexive documentary Gimme Shelter (1970) followed by a panel discussion featuring culture, music and film experts (think the director of The Decline of Western Civilization and a camera operator on Gimme).

After a catered reception and performance of Rolling Stones covers by all-girl L.A. band Calamity Magnet, everyone will be swept back into the Norris Cinema Theatre for one final Stones emblazonment, 2008’s Martin Scorsese concert-footage-turned-IMAX-flick Shine a Light.

The Jonas Brothers and Pete Wentz have nothing on Jagger and Richards, whose recreational drug use and surly, androgynous stage presence helped inspire diverse and cinematically important films that are more than rock and roll nostalgia. So, spend all weekend pretending it’s the late ’60s again and, through the medium of cinema, explore the many reasons why the Rolling Stones is better than your favorite band. Event is free, but RSVP is required.