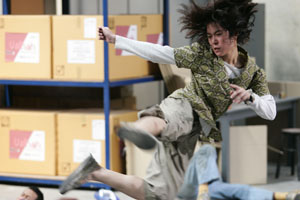 “Jija” Yanin Vismistananda plays a young autistic girl, Zen, who grows up next to a Muay Thai boxing studio. Through observation, Zen absorbs the teachings and the techniques of Muay Thai. When her mother’s hospital bills start escalating, Zen and her cousin set out to collect debts from the gangsters that owe her mother money, which leads to an escalating series of death-defying fights.

Chocolate is certainly one of the better Prachya Pinkaew films, even better than Ong Bak or Tom yum goong. The screenplay is a little ham-fisted but the fight scenes – and let’s just admit that it’s the fights that people are going to buy tickets for – well, the fight scenes are amazing. Jaw-dropping execution.

Jija Yanin is an amazing performer and will undoubtedly be embraced by martial arts fans around the world. Chocolate rests upon her shoulders, and she carries the film throughout, laying the groundwork for what will hopefully be a fruitful career.

Not only is she an accomplished athlete but a charming, engaging performer. When you see the movie, keep an eye out for her impression of Bruce Lee. It’s priceless.