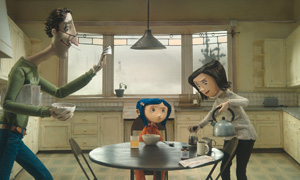 Coraline tries to get the attention of her parents.
(Credit: © 2008 Laika, Inc.)

If you want to have fun at the theaters again, ditch the overdrawn drama and cheesy slasher flicks and see Coraline, a delectably wondrous and frightful film that will knock you out of your sticky theater seat and into a magical realm as beautiful as it is original.

Coraline (Dakota Fanning) is a spunky, adventurous 11-year-old girl condemned to death-by-boredom. Her parents (voiced by Teri Hatcher, John Hodgman) are too busy to notice her, so Coraline is forced to entertain herself. When she discovers a secret door leading to her Other house where her Other Mother offers delicious food and eternal warm-blooded attention.

The parallel world behind the door seems, at first, like a constant playground for curious Coraline. However, when threatened to have buttons sewn in place of her eyes, she must discover the secrets of this alternate world before she is forced to make it her permanent residence.

Henry Selick has outdone himself. His mastery of stop-motion animation allows for a fluid film that is able to stay true to Neil Gaiman’s chilling children’s novel.

Seeing it in 3-D adds amazing depth, higher quality and several squeamish moments that make for an enthralling movie-going experience. Though it starts slow, by the end, the film will have you in its web of enchantment, locked forever in the Other realm, too.