DJ Uniek: Party Over Here: DJ Uniek gets it started with UMUZIQ. 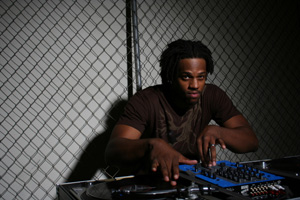 “As far back as I can remember, I’ve always been a DJ,” admits Quaye Kennerly, also known as DJ Uniek. “Even when I didn’t have equipment, I would draw pictures of equipment and pretend to be a DJ.”

At a time when most kids were playing ball in school, Uniek immersed himself in music, taking drum lessons, going to choir practice and perfecting his best Michael Jackson dance moves. It’s not often that a child knows exactly what his path in life is, seemingly straight out of the womb.

“My dad was a DJ. I must have genetically inherited what he did because I never took classes or learned.”

As early as five years old, Uniek recalls one of the first gifts from his mom: a Fisher-Price turntable.

“The one with the big fat needle and the weird plastic records,” he says with a laugh, “I used to scratch on that.”

Fast forward to the young DJ moving from Virginia to California, bringing his bag of DJ tricks to a laundry list of L.A. clubs – the Vanguard, Forbidden City, Cinespace, Sugar, Ritual, Shag, Mood, Element, the Highlands, LAX – in fact, it’s hard to find a local club that Uniek hasn’t spun at. So what is it that makes Uniek different or dare we say, unique?

“Once I start DJing, that’s the zone, it’s all about the moment,” says Uniek of the atmosphere he brings that often begs fans to come back for more. “If I can see everyone’s reaction and they’re vibing with what I’m doing and it’s helping them have a good time, it’s a joy.”

So it’s not a surprise that when Kennerly slips into the persona of DJ Uniek, he feels the most comfortable in his skin.

“A light comes on, the energy takes over and it’s a great place to be,” he says.

Uniek has just released his third album entitled UMUZIQ, venturing into a space where the DJ world and the music world collide. The sounds of hip-hop, house and ’90s-inspired rap infuse the album, mixed with dance songs like “Party Over Here” and “Hot Lunch,” and smooth grooves like “You Are So” and “Say Word.”

Rapping and DJing, have “always been hand in hand,” he says, a place most DJs don’t venture in yet Uniek finds a natural fit. “I would say one of my ultimate goals is to tour venues, to DJ and to perform. I want to do both and be that one big, gigantic party.”

With music in his blood, it was a surprise to hear Uniek describe a time after completing his second album where he felt he had lost his direction and his motivation. After joining the band CheckOne2, whose singer Paris Paul is featured on the track “Take It to the Next Level,” Uniek managed to find his groove again.

“After being onstage again, it was like, you know, when they revive you?” he says, mimicking the shock of a heart defibrillator. “I thought it would be a waste to not do what you’re supposed to be doing. I didn’t want to be a waste.”

His song “The Sun” on UMUZIQ chronicles this time, its soul-searching lyrics many of his fans have connected with.

“This album is a good description of where I am right now in my life,” he says with an easy smile of satisfaction. “It took me a long time to find me, but on this one, I definitely found me.”