The Von Bondies: Talk abot Love, Hate and Everything in Between 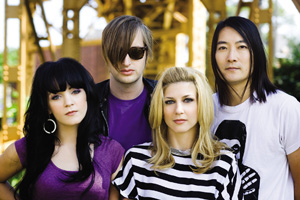 Jason Stollsteimer is the music industry’s most entertaining dichotomy. The frontman for the indie rock group the Von Bondies is an affably charming and funny guy. However, he doesn’t mince words, and he doesn’t pander.

He made headlines a few years back for having a very public row with Jack White (of the White Stripes and Raconteurs). Soon after, Stollsteimer and his band mates struggled and ultimately won the release from their recording contract with Sire Records. He didn’t back down then, and his personal convictions are still strong as ever.

Now, the Von Bondies have returned with their fourth full-length release, Love, Hate and Then There’s You. The album is the follow up to 2004’s Pawn Shoppe Heart, which spawned the infectious single “C’mon, C’mon.”

Stollsteimer is banking on Love as the great comeback for the group. However, he does admit that they are fighting an uphill battle, given the current economy and well ... the recent eradication of a very influential force in music.

The Von Bondies had just debuted their first single from the new release on Los Angeles’ highly popular Indie 103.1 in January 2009. But much to Stollsteimer’s dismay, the station folded before they could reap the rewards.

“It was sad,” he says of the closure. “It was sad when they closed down. Indie 103 was important because it took up the bands that larger radio stations wouldn’t play.”

Not all is lost, though. The group has reportedly linked up with MySpace Music in an attempt to broaden its reach and get the new material out to the public.

For some, the economic ramifications of mass media wouldn’t necessarily be the first topics expected from a rock star, but Stollsteimer’s roots color his view of the world. He and the other Von Bondies are from Michigan – a state hard-hit with rampant fiscal concerns and a growing crime rate. His need to succeed stems from the troubles that he sees young people facing in Detroit and throughout its surrounding areas.

“Most people in Michigan – all they do is they try to leave Michigan. Not Detroit. It’s the entire state of Michigan. We know there’s not much help for us. Growing up in that environment affects everything you do.”

Stollsteimer’s blue-collar background (his father worked for Chrysler) may have been tough, but he’s still the area’s biggest champion.

Thankfully, touring has always offered the group an exciting respite from life’s hardships. Stollsteimer is excited to have the diehard Von Bondies fans along for the ride once again and gets off on the thrill of entertaining crowds. He’s even amused by the crazed groupies who take a somewhat over-reaching interest in the group and its members.

“We have fans that get angry; take it personally. They read the lyrics to the songs and think the lyrics are about them,” he says, laughing.

Stollsteimer is especially tickled by the attention given to Don Blum – the band’s striking six-foot, one-inch Asian-American drummer. When the Von Bondies first arrived in Los Angeles in support of their previous efforts, Blum met and befriended DJ Steve Aoki (of Dim Mak party fame). He since has “bro-ed up” with Smashing Pumpkins guitarist James Iha, as well.

Stollsteimer likens the three of them together as something akin to Beatlemania when it comes to female followers. When I suggest a possible side project for Blum, Aoki and Iha called the Hot Hipster Trifecta, Stollsteimer laughs.

“Don’t give him any ideas,” he responds.

Love, Hate and Then There’s You is currently available. The Von Bondies will perform March 14 at the Roxy. For more information, visit vonbondies.com.