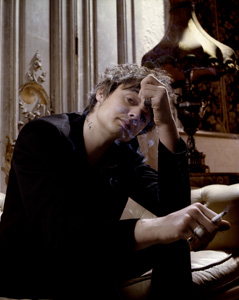 The song “Last of the English Roses” is planned as the first single. Doherty took the Libertines’ self-titled album to the No. 1 spot in the U.K., and both of the Babyshambles releases thus far (the group remains active) have gone Top 10 in their homeland.

Doherty seems to be perennially in the news because of his drug and legal problems, but he’s recently cited Amy Winehouse’s similar situation as inspiration for him to clean up. Astralwerks releases Grace/Wasteland March 24.

Speaking of Amy Winehouse, she too is hard at work trying to shake off self-destruction. The singer has announced the formation of her own record label, Lioness.

The first signing to the label is 13-year-old Dionne Bromfield, a finalist from the TV show “X-Factor,” the British equivalent of “American Idol.” Bromfield is Winehouse’s goddaughter, but no other details of the signing have been released as yet.

Winehouse has been nursing herself back to health and conducting business from the Caribbean island of St. Lucia where she recently made the news for doing something good: coming to the aid of a woman who was knocked out of a boat by an oversize wave.

Dark Was the Night

Record label 4AD is about to release a double-disc charity CD where all proceeds will go to the Red Hot Organization, an international charity dedicated to raising money and awareness for HIV and AIDS through popular culture.

Sharon Jones & the Dap-Kings, Riceboy Sleeps, Andrew Bird, Sufjan Stevens and Iron and Wine are among the other contributors. Dark Was the Night drops Feb. 17, but the songs are streaming right now at myspace.com/darkwasthenight.

Singer-songwriter Darryl Holter is a transplant to Los Angeles from Minnesota, but he sure knows the lay of the land. Holter loves to bomb around town in his black 1950 Chevrolet, and he even wrote a song about it. The lyrics to “Don’t Touch My Chevy” from Holter’s soon-to-be-released self-titled album indicate that you could probably drink his booze, steal his boots or even kiss his wife (on the cheek) and get away with it, but you better not mess with the vintage wheels.

Holter tells endearing stories throughout the album but not all of them are as off-the-cuff as the car song.

“These are stories from my life,” says Holter. “It’s my personal musical journey from country music to folk, protest songs to blues and finally to whatever it is that I do today.”

If you see Holter out cruising, give him a wave; otherwise you can give him a listen when Darryl Holter drops Feb. 17.