Comedy of a Different Color: Stephen Chow Explains Why Kung Fu Hustle is a Martial Arts Film to Sing About 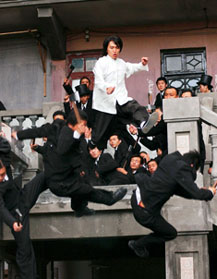 The ads for Kung Fu Hustle exclaim: "A new comedy unlike anything you have ever seen before."

Combine villains who kill with musical notes, a landlady who beats up disrespectful tenants, a defense technique called "The Lion’s Roar," a character named The Beast, a dangerous gang that performs a choreographed dance sequence, and fighters who race around like the Roadrunner – and it probably adds up to something you’ve never seen before. Stephen Chow’s new film, Kung Fu Hustle, includes all these things and more to create a wild martial arts comedy.

Chow, who wrote and directed the film, also stars as Sing, a thief who aspires to be a member of the powerful Axe Gang. As he attempts to extort money from some locals in an apartment complex called Pig Sty Alley, he unknowingly sets off a chain of events that brings the Axe Gang to town.

But the inhabitants of Pig Sty Alley are not what they seem, and Sing ignites a battle between the two groups that unearths the most legendary of martial arts masters.

Already a hit in Hong Kong and at the Sundance Film Festival, Kung Fu Hustle finally makes its way to a wide release in the United States.

Chow, who Quentin Tarantino calls the greatest actor in Hong Kong, last reached international acclaim with Shaolin Soccer. Speaking at times through an interpreter, Chow talks about how many of the best sequences in the film were not in the screenplay.

"It was an accident to have the dancing sequence," he says. "I wondered how to make it different from the other gangs. The actor who played the boss of the Axe Gang was a dancer. It sounds ridiculous to have dancing present toughness, but for me it makes sense. We intercut some incidences they made to show their cruelty."

Chow describes numerous incidences, like this one, in which he came up with ideas on the set. When asked if he admires any American directors, Chow responds with a person who is also known for coming up with ideas on the spot: Steven Spielberg. In fact, many of the ideas that came to Chow during filming make humorous homage to American films, including The Shining and The Untouchables.

According to Chow, some of his actors’ performances came out of their personalities on set. For example, one character that exhibits gay traits wasn’t written that way in the script at all.

"He was created because of his own personality," Chow says. "He gave out vibes, some of his feminine traits."

The performances change from actor to actor, though.

"It depends on the different characters," he says. "Sometimes you find a specialty from someone’s own character. Sometimes the image is in your mind."

For this film, Chow got the chance to work with people he used to look up to as a boy, growing up on kung fu films in Hong Kong. Although his favorite star was Bruce Lee, Chow says Leung Siu Lung (The Beast) was another actor he admired. Leung has a prominent role in Kung Fu Hustle, as one of the main villains who has the power to stop a bullet with his finger.

Chow also had the help of noted action choreographer Yuen Wo Ping, who is famous for working with some of the great kung fu actors and for his recent work on Kill Bill and The Matrix.

"[Ping] is the expert," Chow says. "He’s probably one of the best action directors in the world. He knows all kinds of martial arts [and] stunts. At the same time, he is a man with an open mind. He can accept so many different opinions no matter how crazy [they are]."

Chow mentions that he hopes to do a sequel to Kung Fu Hustle, but for now he’s just hoping for an international hit.

"As a filmmaker, this is always our goal, to be able to go worldwide. It’s always my ambition to go international; that’s the business for me. I always intend to do something that appeals to everyone."

Regardless of the movie’s success, Chow fulfilled something he has longed to do since he was a child.