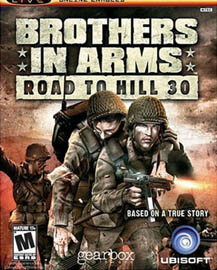 My Xbox is usually filled with big explosions and enraged tough guys. So when I popped in "Brothers in Arms: Road to Hill 30," I immediately found it to be – well, touching.

This game is so very different from your typical console shoot-’em-up – more reminiscent of the film Saving Private Ryan than of the game "SOCOM: U.S. Navy Seals." You play the role of a soldier whom the instruction manual describes as – get this – a "soft-spoken young man."

In most video games, that would get you killed on the spot. But "Brothers in Arms" is about teamwork, not testosterone, and it more accurately reflects the costs of war.

To teach those lessons, the game makers recreated the D-Day invasion of June 6, 1944, when American troops stormed the beaches of France and ultimately turned the tide of World War II.

In story mode, you are Sgt. Matt Baker of the 101st Airborne Division. You didn’t ask to be a leader. But there you are, parachuting in behind enemy lines to lead a squad through Normandy, clearing a path for your military brothers, who are about to storm Omaha Beach.

You control your own weapons in first-person view, tossing grenades and firing rifles and handguns. The presentation is realistic as you work through the French countryside, encountering and eliminating small packs of German soldiers. Nothing is over the top. Grenades pop but don’t boom; rifles, which are probably about as hard to aim here as they are in real life, sound off with pop, pop, pops.

Gradually, you gain enough experience to command a squad of soldiers and tanks. As their leader, you order them to suppress the enemy with gunfire, assault on your "go" or flank the Germans while you keep them pinned.

The real star is the presentation. The soundtrack is majestic and noble, the kind of stuff that stirs emotions in epic movies. The dialogue can be profane, as you would expect in battle, and the story mode script is well written.

Sgt. Baker’s self-narrated misgivings and affirmations as he takes on more responsibility are believable and moving. "I never asked to be squad leader," is a refrain, until he accepts his fate with a stern determination. You can imagine many soldiers feeling the same.

Online, there’s an interesting variety of 10 strategic situations to play out on Xbox Live. In games that feature two or four real-life players, you command teams of Germans or Americans who battle over encampments or the delivery of secret documents.

"Brothers in Arms" could have been a four-star game, were it not for a couple of things that don’t work well. You can press a button to give you an overhead view during missions. But instead of helping to advance the plot, the swirling, zooming view left me dizzy. And the enemy intelligence is set pretty low, meaning they don’t pursue you with much cunning.

But overall, this game is a refreshing delight with simple goals. You and your boys just want to win the war and get home. And that, truly, is an incredible story.

Reviews
The new 'WarioWare' is the game for our attention span-starved, pandemic times
999 views