Friday The 13th: Jason at His Terrifying Best 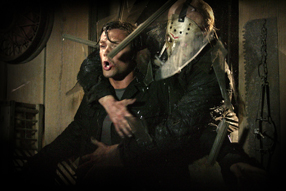 Jason crashes through a window in Friday the 13th
(Credit: John P. Johnson)

There is a certain type of fanboy that isn’t a member of some intergalactic cult of Star Wars or “Star Trek” affiliation. Instead of arguing over Luke Skywalker’s various hairstyles, this cult movie fan instead would rather talk about machetes, decapitated heads or death by sleeping bag.

The Friday the 13th film series has, over the past 25 years or so, garnered such a strange interesting cult fan base that yes, given the appropriate conversation, arguments over best installments, best kills and best “mask makeup” can seriously go down. Call it disturbing, call it scary, but I call it impressive.

When The Texas Chainsaw Massacre was remade in 2003, horror fans across the globe cried fowl. Why muck up one of the simplest, most visceral and altogether impressive horror films in history? Debatably so, the remake turned out to be a highly impressive outing, scaring an entire new audience into coughing up the cash needed to call the film a success.

When it was announced that Platinum Dunes, the Michael Bay-led production company that was responsible for Texas Chainsaw, would be making a Friday the 13th remake, fans went nuts.

Friday the 13th is above all, a movie made for the fans. The original series was known for its outrageous kills, copious blood and gore and rampant sex and nudity. This remake, plain and simple, delivers these basic goods in epic proportion.

“We are fans ourselves, big fans,” writers Damian Shannon and Mark Swift confidently declare. “Everyone who worked on the film was a fan of the series. It was very awesome how it turned out.”

The duo, who was responsible for the equally fan driven Freddy vs. Jason, decided to, instead of remaking the first Friday exactly, to condense the first four films into a kind of alpha-slasher film.

“We wanted to recapture the feeling of the franchise, the real vibe of it,” notes Swift. “The franchise was always about teens behaving badly, with Jason as a sort of anti-hero laying down the law.”

When asked why they decided to bring on Nispel to helm another remake, Andrew Form and Brad Fuller, Platinum Dunes’ producers (along with Bay), note, “magic went down when the three of us worked together.”

Shannon and Swift had some worries that Nispel would distill the humor heavy screenplay they had written for Friday the 13th, but rest assured fans, this film is not only the legitimately funniest remake that has been made, but one of the funniest horror films of recent memory. The kills are very gory, bare breasts fly left and right and Jason Voorhees, the iconic hockey masked killer, is at his terrifying best.