The International: Invoking the Paranoid Political Spirit of the ’70s 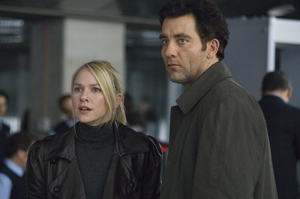 From 1974 to 1976, American cinema rode a wave of paranoid political thrillers, all inspired by events like Watergate, Nixon’s resignation, an oil crisis, the crash of the stock market and the long sought end to the Vietnam War. The ghost of those films, including The Parallax View, The Conversation and Three Days of the Condor, can easily be seen in The International.

Starring Clive Owen and Naomi Watts, the film was inspired by the Bank of Credit and Commerce International, also known as the BCCI, a conglomerate founded in 1972 that went onto maintain over $20 billion in assets, fund such operations as Iran-Contra and eventually became infamous for their murderous hit squad and support of terrorism before being liquidated in 1991.

The movie follows Interpol Agent Louis Salinger (Owen) and Manhattan District Attorney Eleanor Whitman (Watts), two colleagues determined to take down one of the world’s most powerful banks that they believe is involved in a myriad of illegal operations.

At the center of the plot is one central question: Are banks responsible with the money we entrust them with? Considering the film’s script was in development for six years and all phases of production took almost two years, it’s a remarkably topical quandary to raise in these troubled financial times.

Interestingly, the film was originally supposed to be a period piece set in the 1980s but the film’s director, Tom Tykwer (Run, Lola, Run), insisted the story be set in present day, a foresight he calls “sheer, bizarre coincidence.” Tykwer did however set out to make a suspicious thriller in line with films from the 1970s.

Before production began, he sent Watts dozens of films.

“Political thrillers,” she says, “so I could get in the mindset of it all. Three Days of the Condor, All the President’s Men …”

“What attracted me to [The International] was it felt like those ’70s paranoid thrillers,” Owen says. “It was intelligent, well researched, based in fact, but, at the same time, it was obviously a big, international, exciting thriller and it was marrying the two together very well.”

That marriage is one arranged and orchestrated by Tykwer, both literally and metaphorically.

“I think Tom Tykwer is as good a director as I’ve ever come across,” Owen says empathically. “Really special, unique and has a grip on all aspects of filmmaking. The guy gives me music before we even start shooting the film, which he has composed, so already I get a tone for what certain sequences are going to feel like. He’s incredibly prepared, incredibly bright. I had one of the best experiences with him.”

The film’s greatest challenge was presented in the fact that the picture literally spans the globe, from Berlin to New York to Istanbul. It required both the cast and the crew to be incredibly prepared since their schedule left them with little margin for error, and each new place had an entirely new set of issues, concerns and difficulties.

“When you’re traveling to different locations,” Owen explains, “there’s a whole team waiting for you that’s ready to go. You have no real time to acclimatize, you hit the ground running and you start shooting. On a film like this, environment is hugely important. You’re trying to suggest that this corporation is all mighty and all powerful, and it’s very important that my character runs around the world trying to get close to these people because that’s how far their reach is.”

The International releases in theaters Feb. 13.