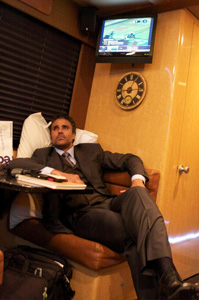 Rick Fox, former professional basketball player, felt compelled to participate in the historic inauguration of Barack Obama. Sure, he could get VIP tickets and hit up all the best parties in D.C. like every other celebrity, but he wanted to do something more substantial.

Fox relates to Obama because he too was raised by a white mother and black father, grew up on an island (the Bahamas) and has a passion for hoops. Fox wanted to chronicle the national spirit brought about by the new president; he decided to embark on an 11 day journey across country, stopping in cities that are milestones in Obama’s career and in Fox’s quest for American citizenship.

Fox hit up MVP Shows, a premiere logistics management company, to explain his vision. The only problem was that the inauguration was in a mere two weeks. The guys at MVP were equally psyched, so they planned the “Lost and Found in America” tour.

They got all the logistics figured out in only three days. Fox and the film crew took off from the Staples Center right after his Lakers post-game broadcast on Jan. 11. They braved snow and ice to reach the site of the Democratic National Convention in Denver, Grant Park in Chicago, Fox’s first home in the United States, Warsaw, Ind., where he met with his high school basketball coach, and finally Boston and Chappaqua, N.Y. to pick up his family and bring them to D.C.

Fox pulled off his dream, conjured only 72 hours before he needed to leave Los Angeles. He’s currently deciding when and how to release the account of his journey.

Fox made his vision a reality in honor of another man from a very similar background who achieved his dreams and embarks on the dreams of a nation – President Obama.