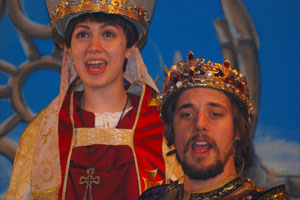 “Pope Joan” is aiming for the heavens but rests firmly in purgatory. I didn’t hate it, but I certainly didn’t love it.

Some members of the cast delivered wonderful performances, while others, unfortunately, did not. Suzanne Nichols as Lucretia and Anthony Gruppuso as Nicholas sang brilliantly. Cristina Dohmen as Martine and Bryce Blue as Lucius also sang beautifully and countered with great, dramatic performances as well.

The costumes were beautifully rendered and detailed, but the sets were chunky and cartoon-ish. The stage, unnecessarily cluttered by the set, was too small and the ensemble cast was too large. They overflowed the space with confusing, over choreographed numbers and transitions.