On the Rise: Heading into the All-Star Break 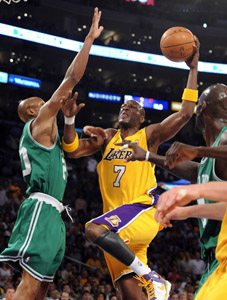 The 12-39 CLIPPERS brought their seven-game losing streak to a halt with a resounding 126-105 win in Memphis Friday. Zach Randolph led the team with 35 points and 10 rebounds, followed by Ricky Davis’ season-high 24 points and Eric Gordon with 23 (scoring in the double digits for his 23rd consecutive game).

Although the LAKERS suffered the crushing loss of center Andrew Bynum Jan. 31, they are still No. 1 in the west with 41-9. Kobe Bryant’s history-making 61 points at Madison Square Garden Feb. 2 and a thrilling 110-109 overtime victory in Boston, which ended the Celtics 12-game winning streak, were huge boosts for the team’s spirit. The Lakers also acquired two young, promising players, Shannon Brown and Adam Morrison, for Vladi Radmanovic in a trade with the Bobcats Saturday.

Sunday the squad headed to Cleveland to face the No. 1 in the east Cavaliers (39-10). The highly anticipated scoring showdown between LeBron James (averaging 28.5 points) and Bryant (averaging 27.5 points) was settled with the Lakers handing the Cavs their first loss at home (101-91). With Bryant feeling ill, the rest of the team picked up the slack, starting with Lamar Odom’s 28 points and 17 rebounds, a career best.

Lakers/Jazz games are always exciting, so all eyes will be on Energy Solutions Arena Feb. 11 as the Lakers try to maintain their best-in-the-league road record before playing the Hawks back at Staples Feb. 17.

PLAYER OF THE WEEK: LAMAR ODOM

With Bynum sidelined, it’s time for LO to step it up as a starter, and that’s exactly what he’s doing. He scored 20 points against the Celtics and led the team in points and rebounds against the Cavs. This is the LO that Laker fans have been waiting for; good thing he wasn’t traded for Brad Miller.

Basketball
The Big Fail: Inside the Lakers’ most disappointing season in franchise history
622 views

Basketball
LaVar Ball: Reuniting his sons would be ‘biggest thing in NBA’
1,498 views

Basketball
The strange, ambitious marriage of the Ball family and Chino Hills
707 views