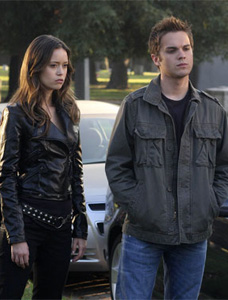 Being a fan of the Terminator films (well, the first two at least), I was skeptical of “Terminator: The Sarah Connor Chronicles,” but I started watching it because it debuted right after “24” last year. I slowly started to fall in love with it, but the show started to slump by the beginning of the sophomore season. However, the last few episodes before the winter hiatus … Whoa. Not only have the writing and plotlines improved, the cast has really grown to embody their respective roles.

Lena Headey (300) is an absolutely stunning Sarah Connor. She’s smart and strong, but vulnerable when it comes to John.

I now realize that my annoyance with Thomas Dekker (“Heroes”) as John last season had nothing to do with his lack of acting prowess, rather his performance was garnering the exact reaction a whiney teenager should provoke from me. Slowly but surely, John is becoming the leader he is supposed to be.

Brian Austin Green (the soon to be Mr. Megan Fox to most of you, and of course, David Silver from “Beverly Hills, 90210”) shines as the smoldering Derek. I sincerely hope he continues to focus on “Sarah Connor” and isn’t lured into a cameo on the hideous new “90210.

The introduction of the incredibly hot Jesse (Stephanie Jacobsen) this season ensures Derek will be around for a while, though. I can’t wait to find out who or what is behind Jesse’s true mission that involves Riley’s (Levin Rambin) relationship with John.

The always-great Garret Dillahunt as Cromartie (Will he ever just die?!) and Richard T. Jones as James Ellison are solid in their supporting roles. But while I applaud her effort, Shirley Manson, in the role of Catherine Weaver, needs to get back to her day job and release another Garbage album.

The breakout performer of this cast is Summer Glau as Cameron. Girl, no offense, but you play a robot perfectly!

Glau plays the wide-eyed, yet not thoroughly naïve cyborg with the perfect amount of mystery, making you want to find out exactly what Cameron’s thinking. I’m sure we’ll see more into Cameron’s past and future when “Connor Chronicles” returns with all new episodes this Friday the 13th. One thing’s for sure, the series definitely whets the appetite for the Terminator Salvation film coming to theaters in May.

My curiosity is also piqued by “Dollhouse,” a series that reunites Joss Whedon (creator of “Buffy the Vampire Slayer” and “Firefly”) with Eliza Dushku (rival slayer, Faith, on “Buffy”). Dushku plays Echo, who is part of an illegal underground group whose personalities can be programmed to carry out various assignments, after which, said personalities are wiped clean as are their memories.

Although I never really got into “Buffy,” I respect Whedon’s passion and creativity. The plot for “Dollhouse” sounds interesting, and who could forget Dushku’s stellar performance in Bring It On? Heh.

For some reason “Dollhouse” reminds me of James Cameron’s “Dark Angel” series that I absolutely loved. All in all, “Dollhouse” is pretty lucky that it comes on right after “Connor Chronicles” because that guarantees that I’ll check it out once at least.