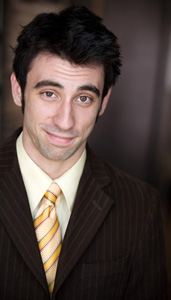 Brad Culver dreams the “possible dream” in his upcoming run as a guard in Reprise Theatre Company’s “Man of La Mancha.” Reflecting on his career since graduating from CalArts just under two years ago, Culver, 23, states, “It’s been a short journey, but an interesting one!”

Doing a fairly brief stint in the world of musical theater before “La Mancha”, he performed in “Paradise Lost” at the Boston Court in Pasadena. According to him, it was a “welcome pleasure and exposure to more operatic, eclectic and traditional blend of music, rather than the experimental, edgy drama.”

Both of Culver’s recent shows are under the direction of Michael Michetti, who has been a close ally, taking Culver under his wings.

“Knowing Michetti,” says Culver, “this production will be a creative, powerful re-examination of a traditional classic story.”

“A really quick process, which will indeed test my strength and stamina!" states Culver.

Culver enthusiastically exclaims, “I grew up watching ‘Seinfeld,’ so it’s a thrill to be professionally connected with Alexander ... also, Brent Spiner (of Star Trek), playing Don Quixote, is a favorite of mine.”

Culver believes in giving back, since he “lucked into a successful career in the arts” at a young age; currently, he mentors and educates inner city youth at a program called Enter Stage Right, teaching LAUSD students a love and appreciation of the arts, particularly live theater.