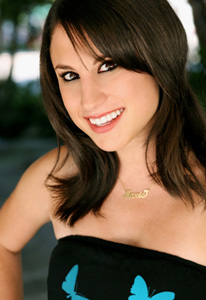 For Maxie Solters, a senior at the USC School of Theatre, this Valentine’s Day will be memorable. She’s been vigorously coordinating the V-Day/USC gala fundraiser featuring a performance of “The Vagina Monologues” – which Solters also produced and performs in – followed by special guest speakers, Eve Ensler, “Monologues” playwright/author/founder of V-Day and Dr. Denis Mukwege, ’08 Human Rights Winner for his work treating rape survivors in the Congo. V-Day is the global movement dedicated to ending violence against women.

After attending a workshop of student V-Day coordinators from across the country, Solters was so inspired that she arranged to have Ensler come to USC for her only L.A. appearance. Coordinating, producing and performing in this event is the perfect combination of Solters’ longtime commitment to community service and her passion for acting.

Solters says that acting in this production is “much bigger than just me.” It’s about giving a voice to the real women whose stories the monologues are based on and empowering women to honor themselves and their sexuality. The play is transformational, as it is simultaneously performed in countries around the world, and audiences can participate by reciting the “happy fact” about vaginas.

“Talking about vaginas or even saying the word would normally be a taboo subject,” Solters says, but in this context, it gives men and women the courage and strength to break the cycle of violence and abuse.

Vagina soaps, lollipops, T-shirts and pins will be sold at the benefit, and vibrators will be raffled off before the show.