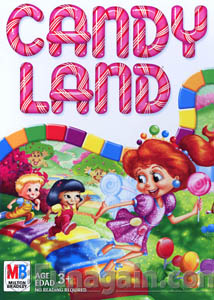 Remember when it was brought to everyone’s attention that Hasbro had optioned a bunch of its board games to be made into films? Well, it looks as if they weren’t joking around. It appears as if nothing is safe from movie development.

Universal is beginning to develop a film based on the Hasbro game “Candy Land,” and the roster of filmmakers has started with the hiring of screenwriter Etan Cohen (Tropic Thunder, Madagascar: Escape 2 Africa) and director Kevin Lima (Enchanted, 102 Dalmatians).

When I originally heard the news that Hasbro was going to develop its board games into movies, “Candy Land” immediately stuck out to me to be the one with the best chance of actually being a quality film. For what this movie is supposed to be, Cohen and Lima appear to be really solid choices to move forward with.

I’m assuming this is going to be a big family friendly movie for kids, which is not my cup of tea, but even so, I can still see the potential for this to be effective. Plus, everyone who played the game when they were young can get real sentimental for 90 minutes.

I used to love to play “Candy Land” when I was a child, and that fact alone is why I will definitely go see the film and fork over 10 dollars of blood and sweat. Out of all their games, “Candy Land” is as close to having somewhat of a story with actual characters.

I’m going to go out on a limb here and assume that the protagonist of the movie will be a child. At this point I’m curious as to whether they’re going to have Candy Land be a principle reality or an alternate reality.

Personally, I’m not a fan of stories about children who live in the real world and for whatever reason, enter a mystical land or jump into the TV or are sucked into a portal, or whatever. Then you have to have those obligatory scenes where the child discovers some sort of parallel between his or her life back home and the mystical realm.

There have been a few films that went that direction that I have liked, but for the most part, I’m not a fan of that device. I would love to see them anchor the whole story in Candy Land.

Ultimately, I’m interested to see what they do, and I hope they don’t turn it into a safe, sappy, children’s film with no edge that kids will realize sucks after a certain age because it only appeals to small children.

Nothing brings balance to the force like a little Shakespeare. When it comes to Shakespeare, all my principles about sequels and remakes go out the window. I welcome an endless ocean of remakes, sequels and adaptations of Shakespeare-related material because no matter how many times you do it, Shakespeare literally wrote the book on storytelling.

I got four words for you: Al Pacino and King Lear. It makes so much sense I’m surprised it’s never happened before. Writer/director Michael Radford who adapted Shakespeare’s The Merchant of Venice into a film, which also featured Pacino in the role of Shylock, is doing this one, and I’m already looking forward to it.

I’m not going to waste ink rehashing the plot of King Lear, because if you’re reading this and you don’t know it, you should be assassinated. I think I remember hearing that Anthony Hopkins was supposed to play King Lear in a different film, but you know what? The more the merrier.

Shakespeare’s plays are only for A-gamers. A role like King Lear could only be played by someone like Pacino or Hopkins.

If you want to remake classic films with teenybopper actors go right ahead, but if you mess with Shakespeare, I hope the fiery pits of hell are appealing to you.