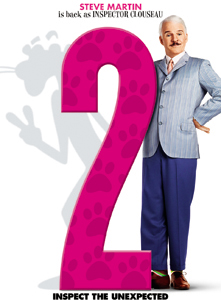 I love Peter Sellers. Try as he might, Steve Martin will never live up to Sellers’ Clouseau.

The Pink Panther 2 has Martin reprising his role as the bumbling French detective searching for the elusive pink gem. Clouseau has been working in Paris as a meter maid who winds up becoming part of an international dream team that sniffs out stolen national treasures.

Along for the ride in the sequel is an impressive cast: Andy Garcia, Jean Reno, Alfred Molina, Bollywood screen goddess Aishwarya Rai Bachchan, Emily Mortimer, John Cleese and Lily Tomlin. Also worth note is newcomer Yuki Matsuzaki as one of Clouseau’s colleagues.

These actors and comedians do an excellent job with the material provided to them. They even produce a few laughs. But many of the gags are so silly that only an underdeveloped eight-year-old would find them entertaining.

The Pink Panther 2 is currently in theaters.