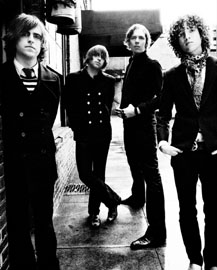 Some would say that Canada’s greatest contribution to the world is maple syrup. Others may argue that it’s Celine Dion or even Avril Lavigne. But none are accurate according to Hot Hot Heat’s drummer Paul Hawley.

"To be quite honest, it’s us. Isn’t it? Of all the liberal ideas and social programs that Canada has, really, Hot Hot Heat is what’s the most important thing that’s come out of our country," says Hawley.

Whether you agree with him or not, there is no denying that Hot Hot Heat is making a "hot hot" name for themselves.

The four-member rock band first caught the attention of critics with their 2002 album, Make Up the Breakdown. Rolling Stone gave the band three stars and praised the band’s ability to "prize the backbeat as much as the melody."

The band first formed six years ago in Victoria, British Columbia, where a growing punk rock movement regularly brought together friends and neighbors. Hawley and his friends began to experiment with different bands and often held jam sessions. It wasn’t too long before Hot Hot Heat (band name courtesy of Hawley) formed and began performing locally and releasing its own EPs.

Fast forward three years, throw in a new guitarist and an upcoming record called Elevator on Warner Bros. Records, and you have the same, but improved, energetic Canadian band, made up of Hawley, Steve Bays on lead vocals, Dustin Hawthorne on bass and Luke Paquin on guitar.

Hawley says that their new album, which was released April 5, is a "step up" from the band’s earlier releases.

"I don’t think they’re crappy. I think they were good for the time and we accomplished what we wanted to accomplish at that time. It kind of stands more for the reflection of what was going on in our life at that time," he says.

Without abandoning the snappy, upbeat music and quirky lyrics that Hot Hot Heat is known for, Hawley says the band decided to take on a different approach since signing with Warner Bros.

"All of a sudden, we have to deliver a great record to a major label, rather than, let’s make a record for fun that our friends and probably a couple thousand other people will listen to," says Hawley.

Although the recording sessions should have been an exciting time for the band, since they were working with famed producer Dave Sardy (Jet and the Dandy Warhols), the band was having a shake-up of its own.

Original guitarist Dante DeCaro was feeling homesick and went back home, so the band set out to find a replacement.

At the suggestion of a friend, the band met and recruited San Francisco native Paquin to take over DeCaro’s spot.

"We liked him and we were more into trying to find someone with the right personality that would fit in with the group … it’s almost as if their personality is as important or more important than their actual skills … because so much of it is our chemistry as people and having to tour together and live together," says Hawley.

And with an ongoing tour all across the U.S. and international stops in the works, Hawley says the one thing that still surprises him the most about American culture is America’s fascination with food.

"You people eat a lot. There’s a lot of food around all the time… It seems like the number one thing on American’s mind is food. I feel like I’ve gained 5 pounds," says Hawley.

Perhaps Hawley just wants to hold onto his boyish figure?

"I prefer to call it my girlish figure," says Hawley.