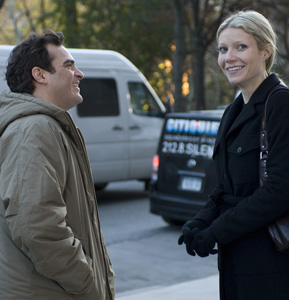 Before he embarked on a potentially faux rap career but after he was an Oscar nominee, Joaquin Phoenix starred in a film called Two Lovers, which might be his swan song if his new music endeavor turns out to be a real passion and not some sort of Ali G-style performance art. If this is his final movie, perhaps it’s no great loss that he’s decided to leave acting behind.

The film stars Phoenix as Leonard, a depressive man who has to choose between two lovers. The good girl is played by Vinessa Shaw as Sandra, a family friend who wants to take care of Leonard and start a life together complete with babies and a dry cleaning business. The bad girl is played by flaxen haired goddess Gwyneth Paltrow as Michelle, the enchanting neighbor who steals Leonard’s heart and bewitches his mind.

Written and directed by James Gray, who also directed Phoenix in another unremarkable film, We Own the Night, Two Lovers is underdeveloped, dull and uninvolving. It’s a bitter love story without any heart or passion.

Even Isabella Rossellini, as Leonard’s mother, is sterilized, muted and dreary. No wonder Phoenix decided to move onto greener pastures.