UNDER THE SEA 3D 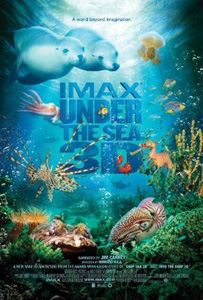 Like a snorkeling trip without the ocean, sunscreen, goggles, breathing apparatus and (thank all that is holy) bathing suit, Under the Sea 3D is a carefree voyage into the diverse lives of strange and absurd creatures of the deep. With a running time of only 40 minutes and aimed at the animal-loving, adventure-seeking crowd, the 3D exploration is a somewhat incoherent tale that jots from coral reef to coral reef in an attempt to outdo itself with the number of viciously ugly water animals it can find.

However, Jim Carrey’s narration is surprisingly sweet, void of his usually unbearable, over-the-top humor. Most importantly, the unbelievable beasts of the sea look like they are a product of human imagination, though no person could create such vibrant, unorthodox creatures.

Let’s be honest. Fish can only keep your interest for so long. And for those who go to the movies for fluid storyline and thematic overture, Under the Sea may not cut it.

However, made by a director (Howard Hall), who is more diver than filmmaker, the finished product is breathtaking, meant to merely scratch the surface of a universe the majority of humankind, stuck above the water, is never able to see.

Under the Sea 3D releases in select theaters Feb. 13.