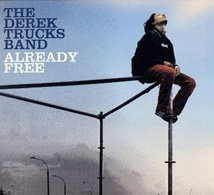 Trucks is one of the guitarists for the Allman Brothers Band, and there is no question that the Southern blues-rock torch has been passed to him as a solo artist. Trucks began his musical career before he was a teenager (He’ll turn 30 this year.), but he virtually grew up in the Allman Brothers camp where his uncle holds down the drummer’s seat.

Trucks embellishes all the hallmarks of the Allman Brothers sound; he plays very fluid slide guitar just like Dickey Betts or the late Duane Allman, his singing voice is soulful and very similar to Gregg Allman’s and he has a deep knowledge of and respect for the blues. Trucks shows off all three of those attributes on Already Free’s opener, a very bluesy take on Bob Dylan’s “Down in the Flood.”

For many artists it would be inappropriate to compare their work too heavily to that of their mentors, but in Trucks’ case, it is impossible and also a big compliment.