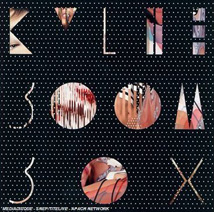 As if Kylie’s tunes could get any dancier, Australia’s answer to Madonna gets the remix treatment on Boombox, a retrospective collection of K’s biggest hits of this decade transformed by the skillful hands of international superstars (Chemical Brothers), indie darlings (Fischerspooner) and even some hometown heroes (LA Riots).

The remixes offer two avenues: tweaks that barely differ from the original – the disco chic of 7th District Inc.’s take on “Spinning Around” – and complete facelifts, namely Knuckleheadz’ bass-heavy pounder “In Your Eyes” and the techno-crunch of Riton’s “Giving You Up.” The subtler interpretations are easier on the ear yet lack production innovation but unsurprisingly remain potent, standalone dance floor killers.

Whitey’s “Red Blooded Woman” takes the Top 40 pop of Minogue’s girl angst into a whirlwind of grimy grunge with perhaps the most philosophical line in her library: “You’ll never get to heaven if you’re scared of getting high.”

France’s Sébastien Léger and Italy’s Kid Crème tackle “In My Arms” and “Love at First Sight,” respectively, to churn out Euro-club house tracks, even though the originals were as Euro-friendly as they get.

“Your Disco Needs You” brings the album to a comical end with an operatic male chorus, while local remix extraordinaire duo LA Riots chop and screw Minogue’s vocals on the closing title track.