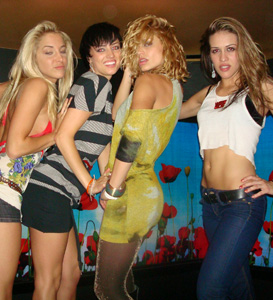 In case you haven’t heard, Lisa D’Amato’s life is all about her music. The ex-“America’s Next Top Model” alum has a lot going on in her world, and it isn’t just all about modeling anymore. D’Amato’s music career as a dope female rapper is about to skyrocket.

“I have the continual struggle to make amazing music. I need to create and express myself all the time, or else I’d go crazy,” says D’Amato.

So why is she consistently under the microscope of the paparazzi? Most people simply dismiss her as an attention-hungry reality TV star who monopolizes camera time.

The countless appearances on TMZ as a social maven have definitely supported that theory. However, her naughty reputation for being the wild-child from “America’s Next Top Model” is the same exact portrayal that D’Amato plans on sculpting into a more interesting and dynamic image. It’s that image that currently fuels her fresh approach to making music.

“I try to make my lyrics catchy, fun and sexy,” says D’Amato. “I want people to listen and do a double-take and think ‘did she just say that?’”

Yes, she did. And her comparisons are best self-described in a joking manner.

Those are big shoes to fill, especially if you wear animated pumps.

Having performed and collaborated with some of today’s music heavy hitters such as Mickey Avalon, Cisco Adler, DJ Lethal and Shwayze, it seems like D’Amato is on the right path for success. Her song “Can’t Touch It” was just featured on the latest Season of HBO’s “Entourage,” and she just wrapped production on a new music video for her latest single, “Trainwreck.”

Her loyal fan base describes D’Amato’s music as brash, fearless and inventive. Listening to her debut album, it’s pretty evident that there are no other women on today’s music scene that say the things D’Amato rhymes about.

Count on Lisa to say it loud. Very loud.

For fans of hip-hop, reality television or beautiful women wearing bikinis, her show is one you definitely don’t want to miss.